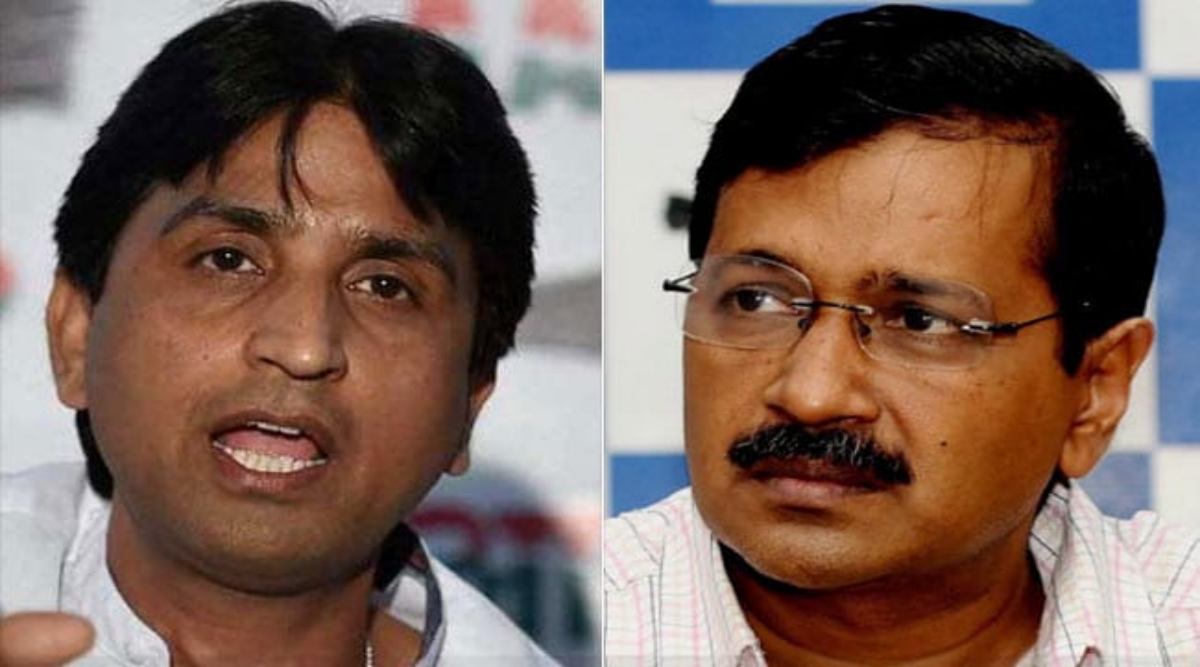 Recently, the famous poet and ex co-founder of the Aam Aadmi Party, Dr. Kumar Vishwas in an interview puts across some scandalous allegations against CM Arvind Kejriwal. In this interview, Kumar Vishwas speaks about the present-day CM of Delhi, Arvind Kejriwal. He speaks that Mr. Kejriwal always wanted to rule Punjab as a CM. If not possible then the first PM of independent nation Khalistan. He also claims that Mr. Kejriwal is hungry for power and it’s clearly shown in his modus operandi too.

Not only that he asks and challenges Arvind Kejriwal to admit that “I am against Khalistan and people associated with Khalistan promoting agenda”. Kumar Vishwas says he never called him a terrorist. But he has seen him meeting anti-social elements.

Now allegations by party founder, Kumar Vishwas, that the AAP sold Rajya Sabha seats in Delhi and that it buys the silence of media with juicy advertising spends! Skeletons are tumbling out of the closet, as AAP unravels. pic.twitter.com/t4rY8S1r8S

Kumar Vishwas also says that he is not bothered about politics and anyone can lose or win, it’s not in my hands. But the words I am saying are true. He adds that I made that party with people like Manish Sisodia, Arvind Kejriwal, Ashutosh, and others. But I feel now that it has gone onto the wrong pathway. At that time when the party was formed Lokpal was our main issue. Look at that subject now, it is put into the bin. But Kejriwal will not speak about it anymore. He also questions about selling the Rajya Sabha tickets in Delhi and not only that Arvind Kejriwal pays a hefty amount to media houses for advertisements to keep them quiet.

AAP Calls The Charges Fabricated To Defame The CM  :

The first and foremost reaction of the AAP was to ask for banning the circulation of the interview as they feel it’s against the Modal of Conduct as per ECI rules. Raghav Chadha, AAP leader, warns of strict legal actions against Kumar Vishwas. In addition to this Raghav Chadha says that if any media house, channel circulates the video or will provide a platform to escalate the matter, will be facing legal consequences. Does Raghav also say why Kumar Vishwas did not tell the security agencies about the ill intentions of Kejriwal till now?. Why he is speaking just two days before the Assembly polls of Punjab. In the end, he says that just because Kumar Vishwas did not get Rajya Sabha Seat he is defaming our leader. 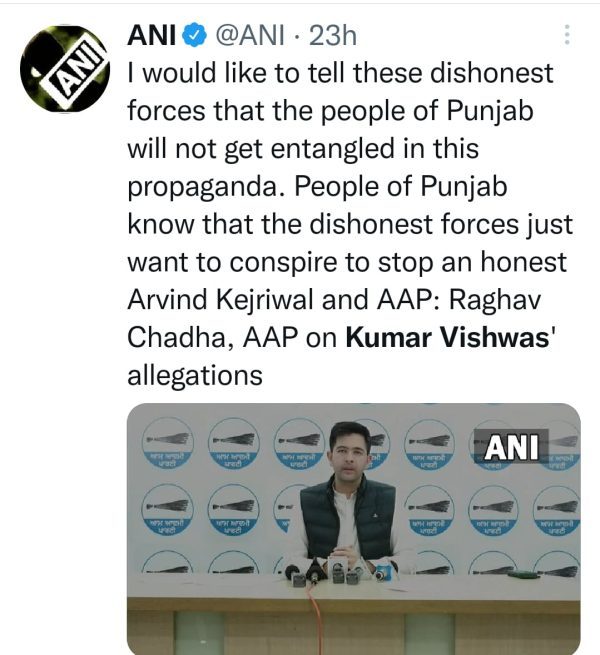 Even CM Kejriwal himself tried to clear the charges against him, he quotes “I am the sweetest terrorist who make schools, hospitals for people”. While campaigning on the last day in Punjab elections Kejriwal says that ” Narendra Modi, Rahul Gandhi, Priyanka Gandhi, CM Channi and others have come together to defeat the AAP, they don’t want us to win”. 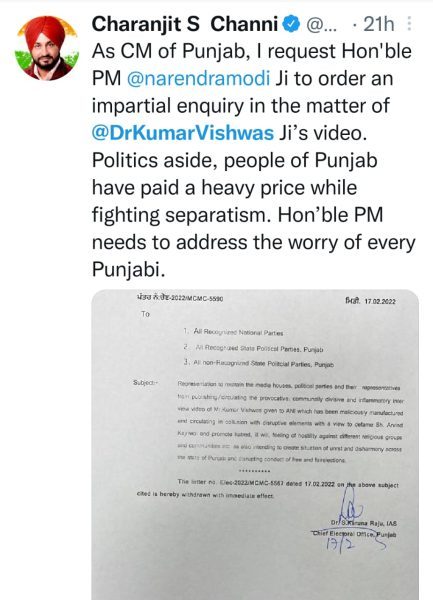 CM of Punjab, Charanjit Singh Channi writes to PM Modi seeking action as it is a matter of deep concern for the people of Punjab. Rahul Gandhi and Priyanka Gandhi, Congress leaders both attacked Kejriwal and asked people not to get trapped in his tactics. His Delhi model failed miserably during the second wave of Covid. Rahul Gandhi says he goes and meet terrorist in their houses. How can he give safety and peace to the people of Punjab?