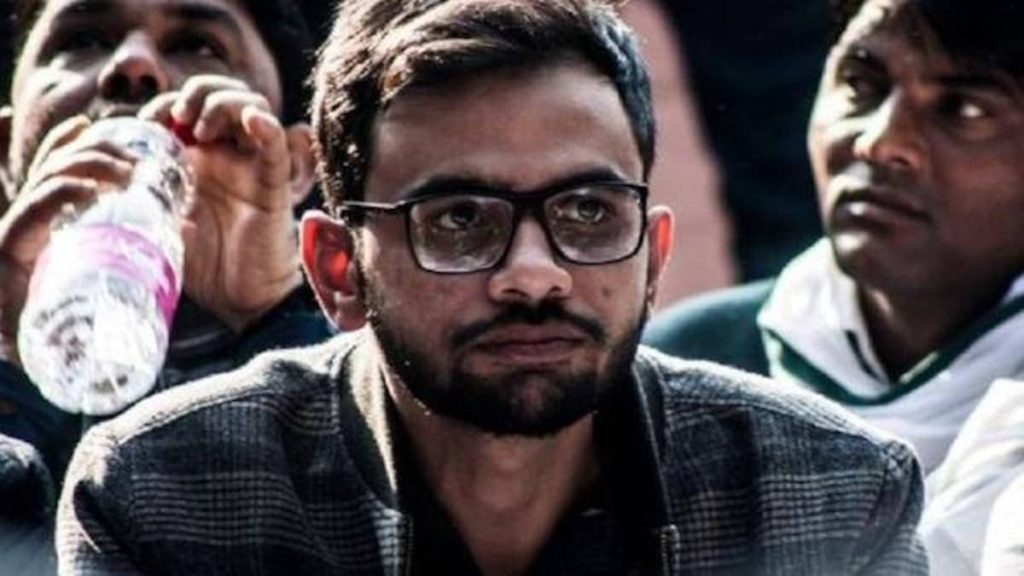 IS CRITICISM AGAINST PM NOT ACCEPTABLE?

Delhi High Court on Wednesday while hearing the plea of Umar Khalid asks if the intention of words like ‘Jumla” used for PM is valid or not?. Umar Khalid is in prison for the last 583 days under UAPA for criticizing the PM during his speech in Amravati in Maharashtra in 2020. 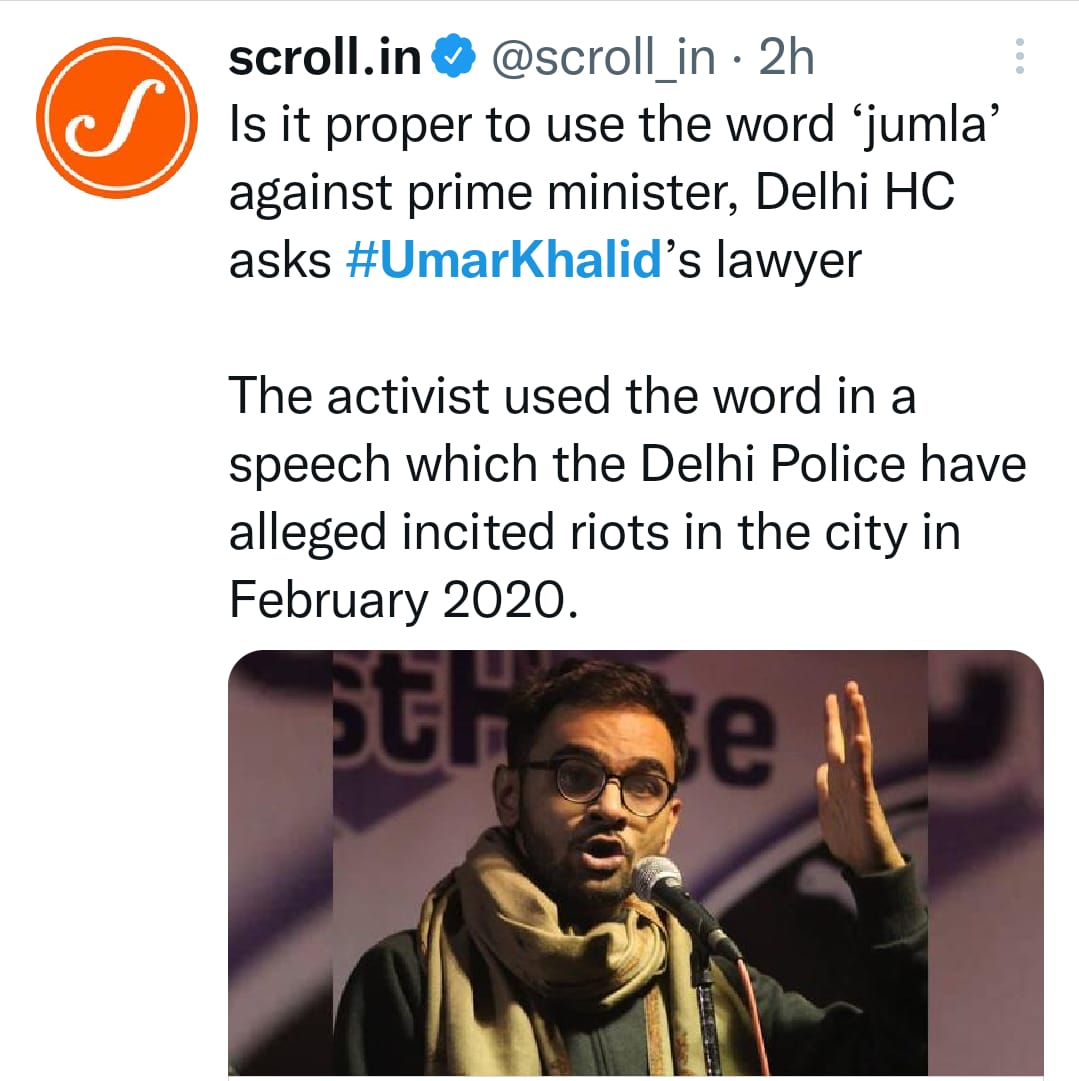 The Delhi High Court hearing was governed by Justice Siddharth Mridul and Rajnish Bhatnagar. The bench also asks questions pertaining to the use of words like “Krantikaari” and “Inqualabi” by Umar Khalid. As such words and their sentiments had led to violence at any stage or not, is important to know. 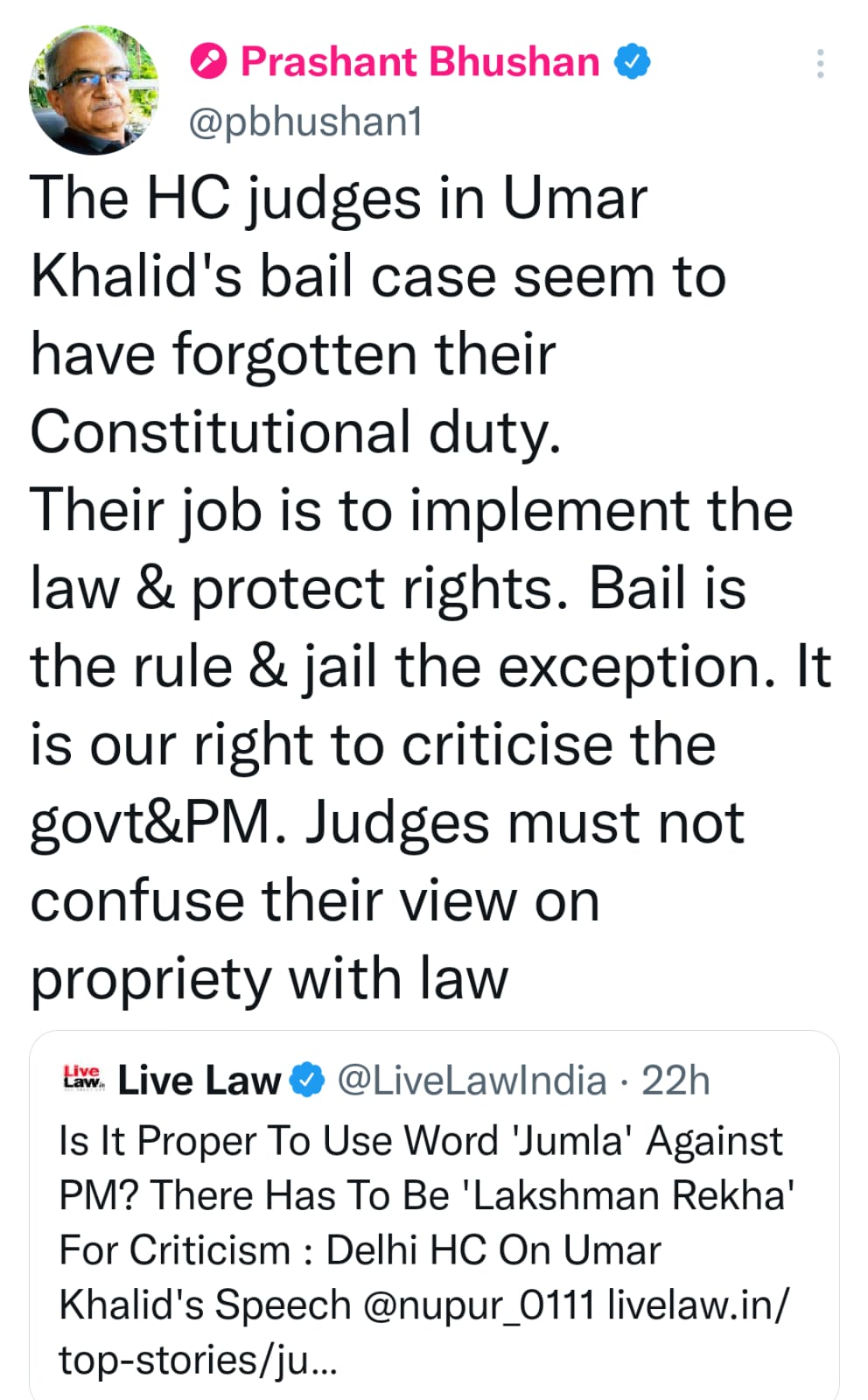 The bench of Delhi HC says that there has to be a fine line drawn for criticism. Justice Mridhul said, “Today, we live in the age of 5G where anything you say, if it uploaded on social media or youtube, it will transcend geographical areas. So, the question is did his speech and subsequent actions results in riots that were witnessed in northeast Delhi? Live link has to be seen between the speech and other materials gathered by the prosecution and if it led to incitement of violence. What is the consequence of your employing these offensive expressions? Did they invite the populace in Delhi to come to the streets and indulge in riots? If they did then are you guilty of being charged, under sections of UAPA”.

Well talking about Umar Khalid, his counsel Advocate Trideep Pais said, “He says a lot against the PM, but it is in context of the policies. It is not illegal to use the term and at this rate, people won’t be able to speak”. He also adds that “criticism of the government cannot become a crime. 583 days in prison for UAPA is not what is envisaged for a person who speaks against the government. We can’t become so intolerant.”

Why Criticism Is Criticized In Modi Govt.?

It is an irony when PM himself says that “criticism should be welcomed. It is the backbone of our constitution and democracy”. Yet we are seeing a steep rise in cases of UAPA over the last few years.

Recently only Jignesh Mavani from the congress party was arrested tweeting against the PM. Similarly, many journalists, farmer leaders, students, social activists, etc have been charged under UAPA.

The language which insults the PM has been used by the BJP members of the opposition party too. But no cases are filed against them e.g. Kapil Mishra, who also ignited riot-like conditions with his speech in Delhi. Hate speech against Muslims is given in Dharam Sansad in Delhi, UP, MP etc yet those culprits are free to roam on bail.

So, it’s high time that even the judiciary needs be transparent in the definition of the Criticism. As criticism is our democratic right and policies which are formed by the centre govt. have to face criticism.