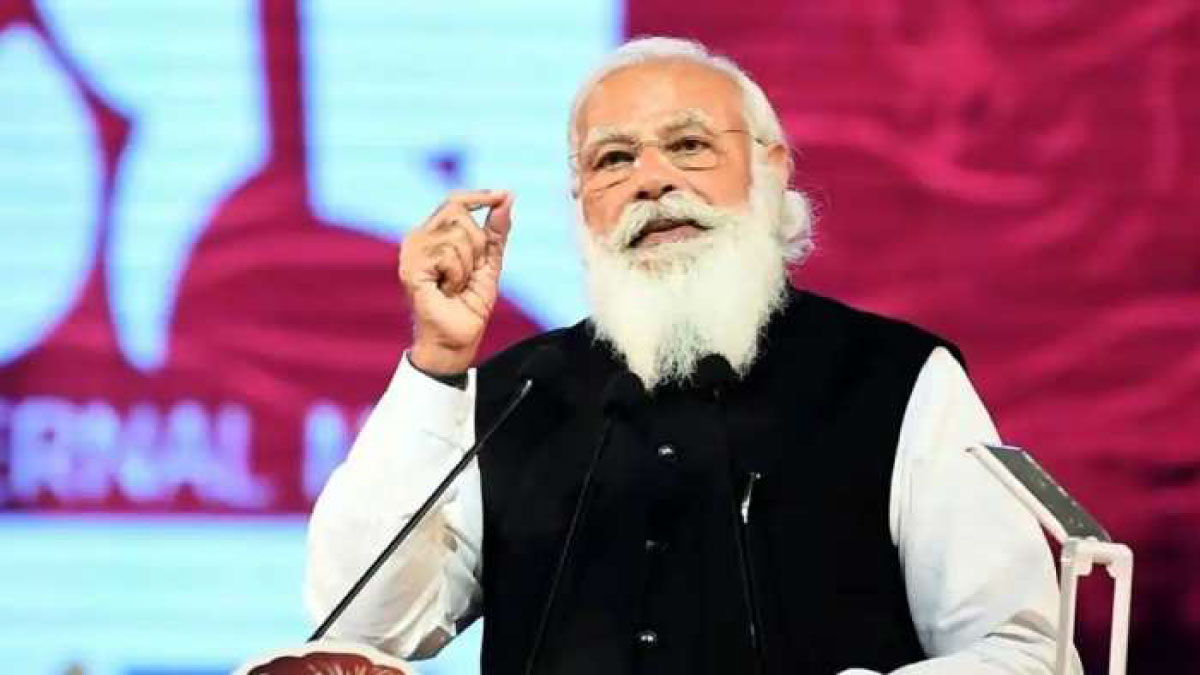 Prime Minister Narendra Modi counted the achievements and plans of the Yogi government in the first virtual election rally. Along with this, fiercely attacked the Opposition. PM Modi addressed the people of 21 assembly constituencies of Shamli, Muzaffarnagar, Saharanpur, Baghpat and Gautam Budh Nagar virtually and sought support for the party candidates.

Chief minister Yogi Adityanath, BJP state president Swatantra Dev Singh, deputy chief minister Keshav Prasad Maurya attended the rally from the virtual studio set up at the BJP state headquarters. A large number of BJP supporters were present in all the districts including Noida to listen to the PM.

PM Modi said that no one can forget what was discussed about UP. Five years ago, only the ‘dabangs’ and the rioters used to run the law. Their rule was going on. Daughters were afraid to leave the house. The mafias used to roam under the protection of the government. The people of western UP can never forget that the then government was celebrating when the riots were taking place.

The news of the migration of people used to come every day. Incidents of kidnapping and ransom had ruined the people. In five years, the Yogi government has brought UP out of these situations. I have also been the chief minister of a state. Today, be it, farmers of UP, employees, traders or mothers and daughters, everyone is getting respect.

The Prime Minister further said, “I am happy to see that people are very cautious about these riotous thinking people. People do not want to bring back those days of these people. People have decided that they will make BJP victorious with more votes than before. Seeing our work and their exploits, the people of UP are going to give full support to the BJP. Voters have decided not to hand over UP to rioters again.”

Attacking the opponents regarding the superstition related to Noida, he said, those leaders who are afraid of coming to Noida, do not trust the scientists, they cannot develop the youth and UP. Only BJP is doing the work of taking UP on the path of development and only BJP can do it. The dreams of the youth are behind the work done in the five years of development in UP.

PM Modi also said when riots were taking place, those people (Opposition) were celebrating, the public would not allow such rioters to come to power. Whatever the UP government is doing, the Dalits, the backward and the downtrodden are getting the maximum benefit. By making a law on triple talaq, the government has given their rights to Muslim daughters. The government is providing free rations to 15 crore citizens of UP. This is the same UP where the ration of the poor used to be stolen earlier. Today every grain of ration is reaching the people.

Nearly 43 thousand crore farmers have got money directly in their accounts from PM Kisan Samman Nidhi. Now the time has come that we need to worry more about the small farmers. The government has formed the Kamdhenu Commission. The government is running many schemes to save animals from diseases.

“The government which existed before 2017 used to run projects on paper. These guys (Opposition) dragged on projects for years. Their motive behind this was to earn money,” PM Modi said. Taking a jibe at Akhilesh Yadav, PM said, “I have heard that some people have dreams… Dreams come to those who keep sleeping,” he added.

BJP has a vision of development. However, people full of ego are dreaming of getting power. They have opposition in the name of vision.

Anoop Gupta, in charge of the virtual rally, said that a live telecast of the speech is being shown through LED screens at 98 places in 21 assembly constituencies of five districts. In this way, 49,000 people are listening to PM Modi’s speech at 98 places.

At 7,878 booths in these districts, Shakti Kendra is in charge, booth president, Panna Pramukh, beneficiaries and common people are also listening to Modi on TV. He said that links to the Jan Choupal rally were also sent to the smartphone holders of the assembly constituencies where programs are to be held. Apart from this, the workers and all the people from all over the state are listening to the Prime Minister through various platforms of social media.