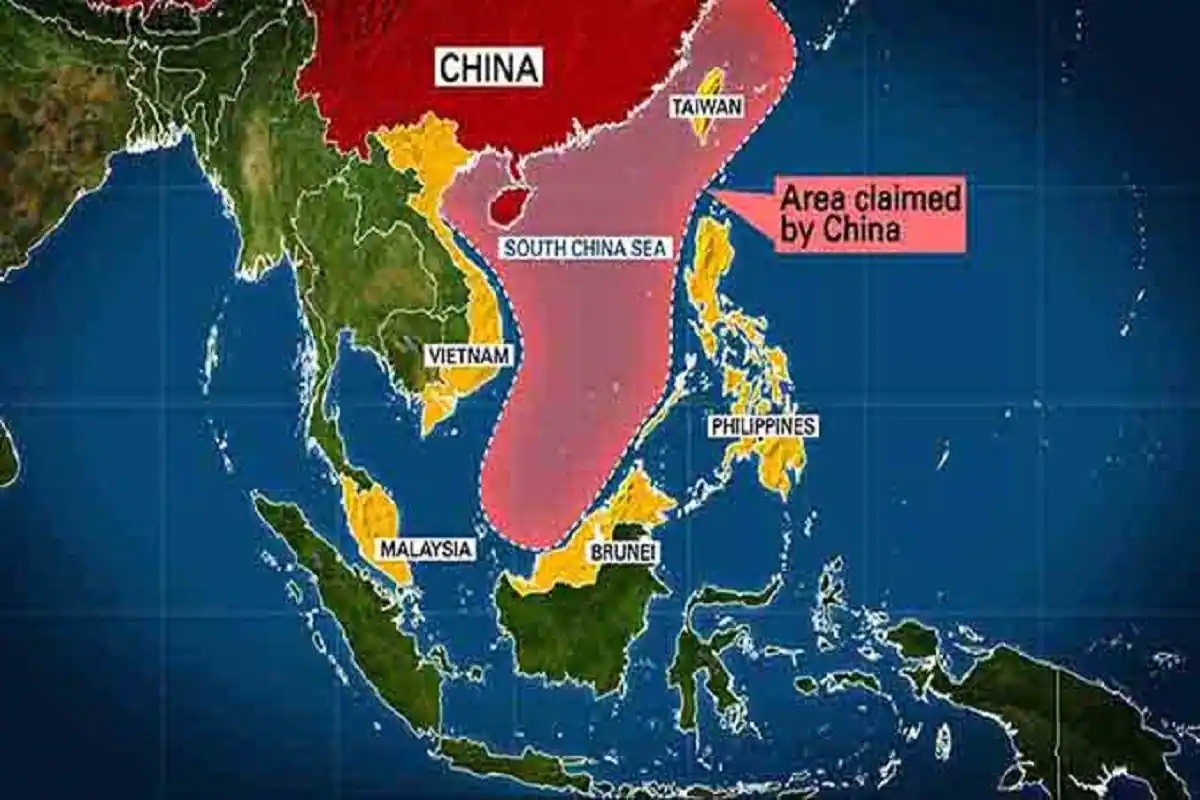 South China sea has become a zone of conflict. China’s hegemony, muscle flexing and sweeping control over the sea and certain islands have antagonised the littoral countries like Brunei, Indonesia, Malaysia, the Philippines, Taiwan and Vietnam. China claims of complete sovereignty of the sea , including some Islands together with huge untapped and even undiscovered maritime and mineral resources such as 11 billions of oil and 190 trillion cubic feet of natural gas.

China claims that foreign militaries can not carry out any clandestine intelligence gathering activities  in the areas which they claim are under their absolute control. However, the USA is not prepared to accept this claim of China. It says that under the UN Law all the littoral countries are free to navigate through the areas which China claims as its exclusive EEZ (Exclusive Economic Zone).

Under the UN CLOS Philippines had filed a case against China in the permanent  court of  Arbitration at the Hague. The Court ruled in favour of Philippines, but China bluntly declined to accept the ruling. It is reported that China has reclaimed huge land in the South China Sea. It has also created new Islands and massively fortified its defense infrastructures in the Paracel, Spratly and Woody Islands. It has set up Air ports, deployed fighter planes, missiles, radars etc.

But China’s assertive claims in the South China Sea is being constantly countered by the USA. It is conducting FONOPs into the disputed sea  and providing support for the Southeast Asian Countries. SLOCS (Sea lines of communication) are important Sea routes for trade and also for Naval forces. What is being feared is that these territorial disputes  and the sweeping China’s authoritarian control over the sea may lead to militarization and arms build up.

In terms of economy, trade and navigation, South China sea is very important to Australia. Since 1980 Australia has been conducting surveillance operation by P-3 air craft besides conducting naval patrols and exercises. Australia is very worried about Chinese authoritarianism. Majority Australians view China as a potential threat to  their country.

The priority of the military partnership between the USA, the UK and the Australia is to equip Australia with the latest military hardware in order to strengthen Australia’s influence In the South East Asia.

In another development Germany has deployed its frigate Bayern in the South China Sea. Why it is viewed important is that it is the  first deployment of a warship in 20 years. The country has made its stand clear that deployment of a frigate is our strategy in  view of the change of regional situation due to the assertiveness of China.

To counter China’s hegemony, the USA is conducting FONOPs (Freedom of Navigation Operation) in the sea on a regular basis. But China wants them to stop it. They have been making it clear that they are against the  intrusion of naval ship of any country into its exclusive zone. As a part of military’s build up  they have developed Anti Ship Ballistic Missile Capability. They had fired ASBM into the South China Sea In August 2020. China’s primary object  is to deter American Naval Ships from entering into the disputed zone. Naturally the USA is worried about this latest development.

Competing territorial claims and maritime rights by the littoral countries of the South Chins Sea have resulted in tensions. But China is unmoved. Even it had declined to accept the ruling of the International Tribunal clearing proving its audacity. There is a simmering disagreement between the USA and China over free navigation and trade. If  China is not ready to sit with the regional countries to solve their maritime disputes and keeps only flexing its muscles, the risk of armed confrontation can not be ruled out.