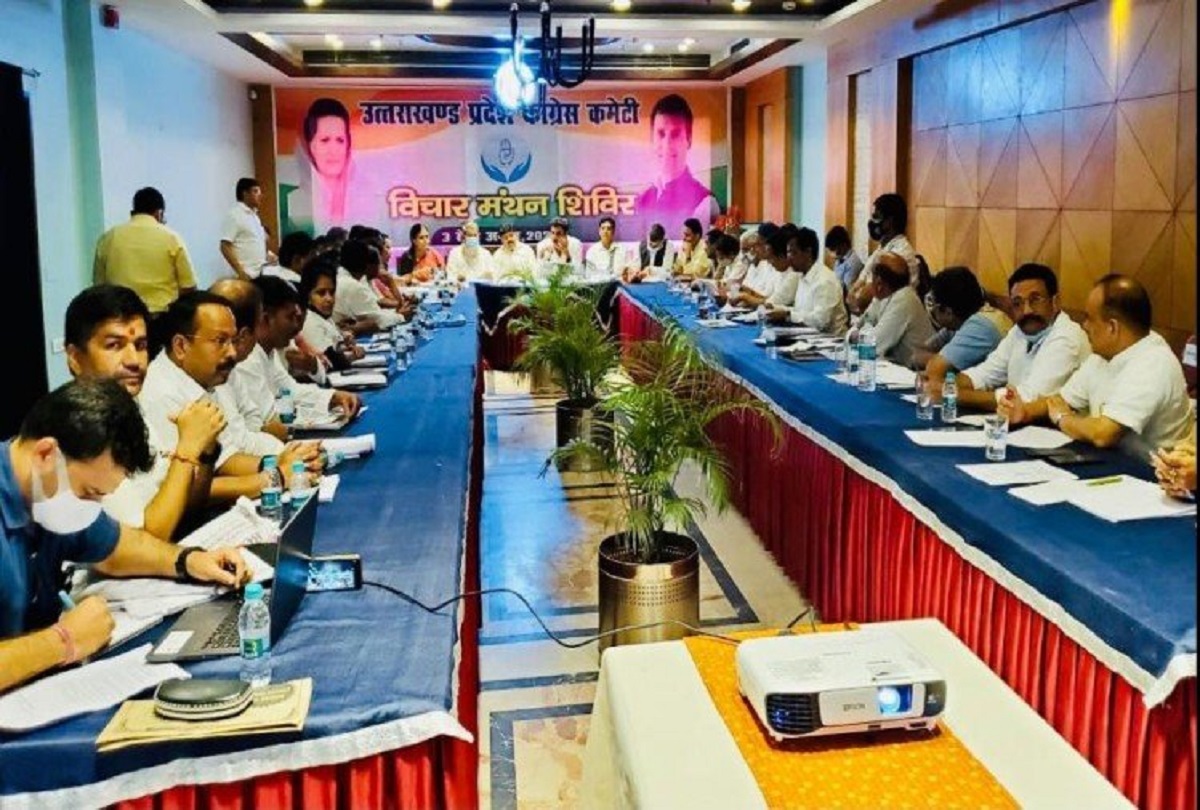 Uttarakhand Congress’s three-day brainstorming camp began in Rishikesh, the pilgrimage town. In view of the upcoming assembly elections, in this camp, important for the Congress, the veteran leaders of the state on the first day emphasized on making the strategy of the party by brainstorming minute by minute. In the camp that started with the meeting of the core committee, state in-charge and core committee president Devendra Yadav informed the committee members about the guidelines issued by the central organization.

In the first session on the first day of the brainstorming camp organized at a hotel on Dehradun Road, state in-charge Devendra Yadav placed the agenda of the three-day brainstorming camp in front of various committees. The series of closed-door meetings which started at 10 am continued till late evening. Firstly a meeting was held with the members of the election campaign committee. After this a meeting of the training committee was held at around 11.30 am. A meeting of the Publicity Committee was called at 1 pm. Election Outreach Committee meeting was held at 4 pm after lunch break. After this, the suggestions of the media committee were discussed at 3.30 pm. A separate discussion session was held with the chairpersons of all the committees at 7.30 pm.

Party state in-charge Devendra Yadav told that the members of the committee submitted their report in writing and orally. All the committees that have been constituted by the state Congress organization, the meeting of all the committees will be held for the next two to three days. Congress’s upcoming election campaign map will be prepared only after reviewing the views and suggestions from all the committees in the last session on the third and last day.

During this, Congress State President Ganesh Godiyal said that the Congress brainstorming camp has started well. The meetings are running longer than what has been fixed for the meetings with the committees. Suggestions are being received from all the committees. He expressed hope that from the Manthan Shivir, Congress will be able to prepare such a road map, on which we will be able to overthrow the ruling BJP government in the state.

There was enthusiasm among the Congress leaders regarding the Congress brainstorming camp. The officials of the organizing committee had started preparing for the meeting from Monday. Here, the workers once again threw water on the exercise of party solidarity. The slogans raised in support of their respective leaders made the senior leaders uncomfortable. In the end, Harish and Pritam themselves had to come forward and pacify the workers.

Now it also becomes the duty of the party that how to reach among the people and explain their point to them. He said that often people talk of factionalism in the party, whereas it is a propaganda spread by the BJP. There may be differences in Congress, but there are no differences. Whereas how much unity there is in BJP, it has changed three chief ministers in three months.

On the issue of providing free electricity in the state, Godiyal said that if Congress comes to power, then 100 units of free electricity will be given to the consumers in the first year. After that it will be gradually increased.

On the issue of Jageshwar, the State Congress President said that it has become the style of BJP leaders to harass the centers of faith and indulge in such indecency at religious places. Taking strict action against BJP’s central leadership, Dharmendra Kashyap reiterated his demand to cancel his membership.