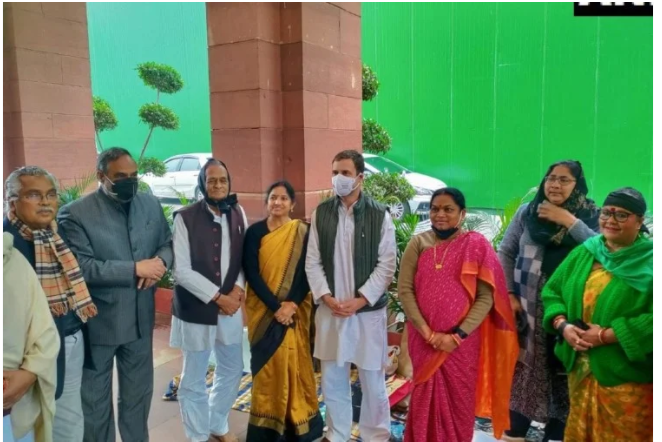 Former Congress President Rahul Gandhi met 12 Rajya Sabha MPs during the winter session of Parliament. Rahul made this meeting during the protest of the suspended MPs. These 12 MPs were suspended from the current winter session for uproar and indiscipline in the Rajya Sabha during the last monsoon session. The Opposition demanded that the suspension of 12 MPs be revoked but M Venkaiah Naidu rejected this appeal by saying “The members who had committed the sacrilege against the house have not shown remorse. So, I think the appeal by the Opposition [to revoke the suspensions is not worth considering.”

It was really bad scenario in Parliament that people observed on August 11 when chairman of the house and Vice-President M Venkaiah Naidu was in tears. He broke down, saying that some Members of Parliament (MPs) had committed sacrilege in the “temple of democracy”.

M Venkaiah Naidu said, “I was very sad, and I’m deeply anguished… There is no act to convey my anguish as I have spent a sleepless night… I struggled to find our provocation,” while referring to Opposition MPs climbing the table, waving black cloth, throwing files, tearing down papers and pushing security staff and other members of the house.

The Opposition has strongly objected to the decision taken by the Rajya Sabha chairman, with Congress leader Mallikarjun Kharge leading the protest. Meanwhile, Congress leader Mallikarjun Kharge targeted the central government. He said that ever since this government came, it is cutting the budget of MNREGA. The budget which he had kept at Rs 1,10,000 crore in 2020-21, has now increased to Rs 73,000 crore. 38,000 crore has been reduced in this.

He said that when people returned to their respective homes during the Corona period, they did not have work. Even after searching them, the work could not be found. On one hand they did not get work, on the other hand the government is reducing the budget.