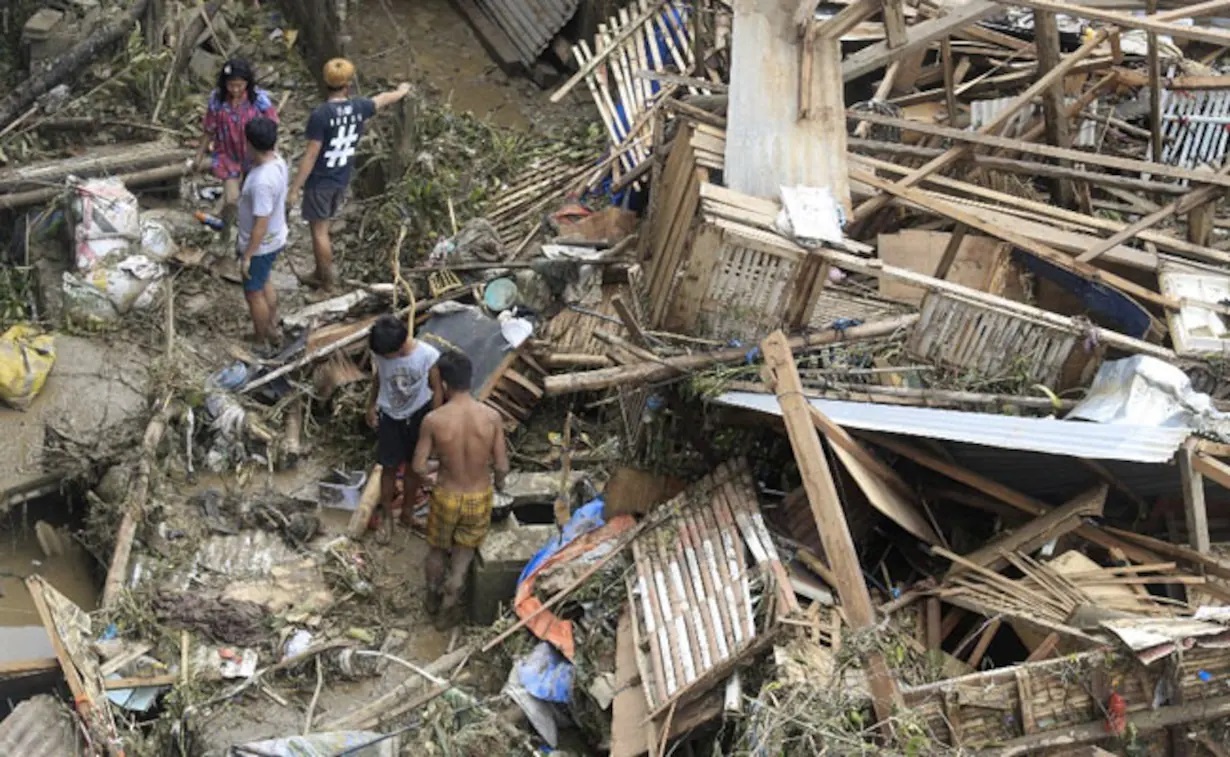 July to October is considered the typhoon season in Philippines but the recent typhoon Rai that slammed the  archipelago came late in the season on 16 Dec i.e. last Thursday. Bohol with 94 dead till last Monday was the most devastated islands. Survey of Ubay, a tourist town in Bohol gives a very grim picture of total devastation, it appears as if the town had been bombed in a war. Almost all the houses have been blown off or just flattened, hundred of fishing boats are lying totally ravaged.

The toll till Monday stood at 375 dead, 56 missing and 380000 homeless. The survivors need drinking water, food and medicines desperately. The super storm broke tall trees, uprooted a very large number of trees, blew off roofs, up rooted and bent the electricity poles disrupting power supply and thus plunging the entire area in complete darkness and extensively damaged the crops. The torrential rain flooded the villages forcing the people to flee to safer places.

The other islands which have very seriously been impacted are Dinagat, Mindanao and Siargao. The velocity of wind recorded was 195 kms per hour.  A total of 167 deaths have been recorded from these islands till Monday.

Massive operations for supplying food, water and medicines, clearing and repairing roads, restoring the electricity connections have been launched on a war footing by the govt. Thousands of military, police and fire personnel have been deployed for these purposes. Again heavy machineries have been pressed into service to clear the roads blocked by the uprooted trees and remove the damaged things which are lying scattered all over.

REACTION OF THE PEOPLE

Rescuers are facing problems and the recording the scale of loss is also being hampered as many areas lying  inaccessible. But the people are very frustrated at the slow pace of response from the govt.  To quote an angry reaction of a resident of Siargao, “No one showed up. I do not know where the politicians and elected candidates are.” Some even commented that they had paid big taxes from their earnings but when they needed the help badly, there is no one to help them. People are complaining that there is acute; water scarcity and in some places looting of shops is being reported by the locals.

The storm hit the nation at a time when Philippines was trying to recover from a crippling covid-19 restrictions that decimated tourists number reducing govt earning drastically.

The Nation being most vulnerable to the change in climatic condition, it is slammed by an average 20 storms yearly. The super cyclone Haiyan killed 7300 people in 2013. It was the severest typhoon that had hit the nation ravaging the nation completely. The scientists explain that it is not difficult to understand why the storms are increasingly becoming more destructive. They point out that as the world is becoming warmer, the storms are also becoming stronger and being formed rapidly. The world is becoming warmer because of climate change which is purely man made.

Being very vulnerable to the climate change and being  prone to storms on a regular basis, the Nation must have a robust disaster management system. It is a country of islands, hence, in every island govt should set up shelter house where people can take refuge whenever the nation is battered. The international community should seriously think about the menace of climate change.