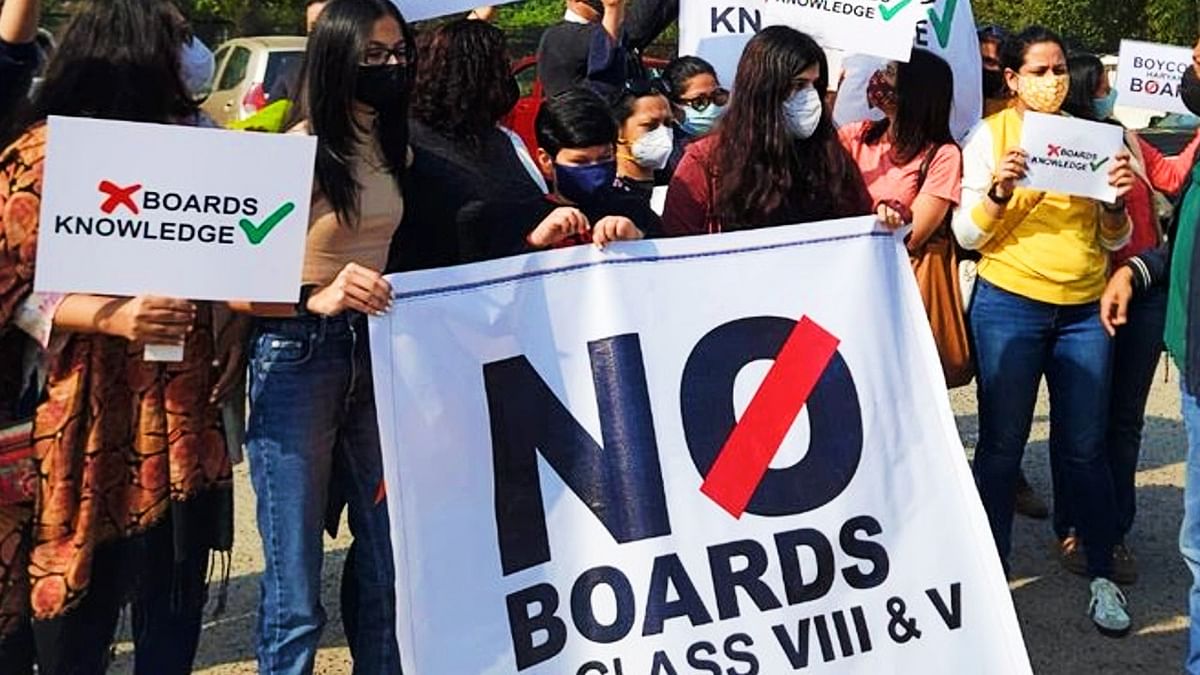 The ‘No Boards’ protest in Gurugram was arranged against the decision of the Haryana education board’s decision of conducting Board exams for class 5 & 8. The decision as per the state education board will be implemented irrespective of the school affiliated board. This decision was announced on January 18, 2022, under the amendment of the Right to Education Act.

Haryana Government appointed SCERT as the academic authority to conduct board exams for classes 5 and 8. On February 4, 2022, BSEH (Board of School Education Haryana) wrote to all districts education officers. The letter stated that all schools must register with the BSEH by February 15, 2022. In addition to this, the letter states that schools will conduct exams from this March only. But the board has decided to skip class 5 board exams this year owing to the pandemic. 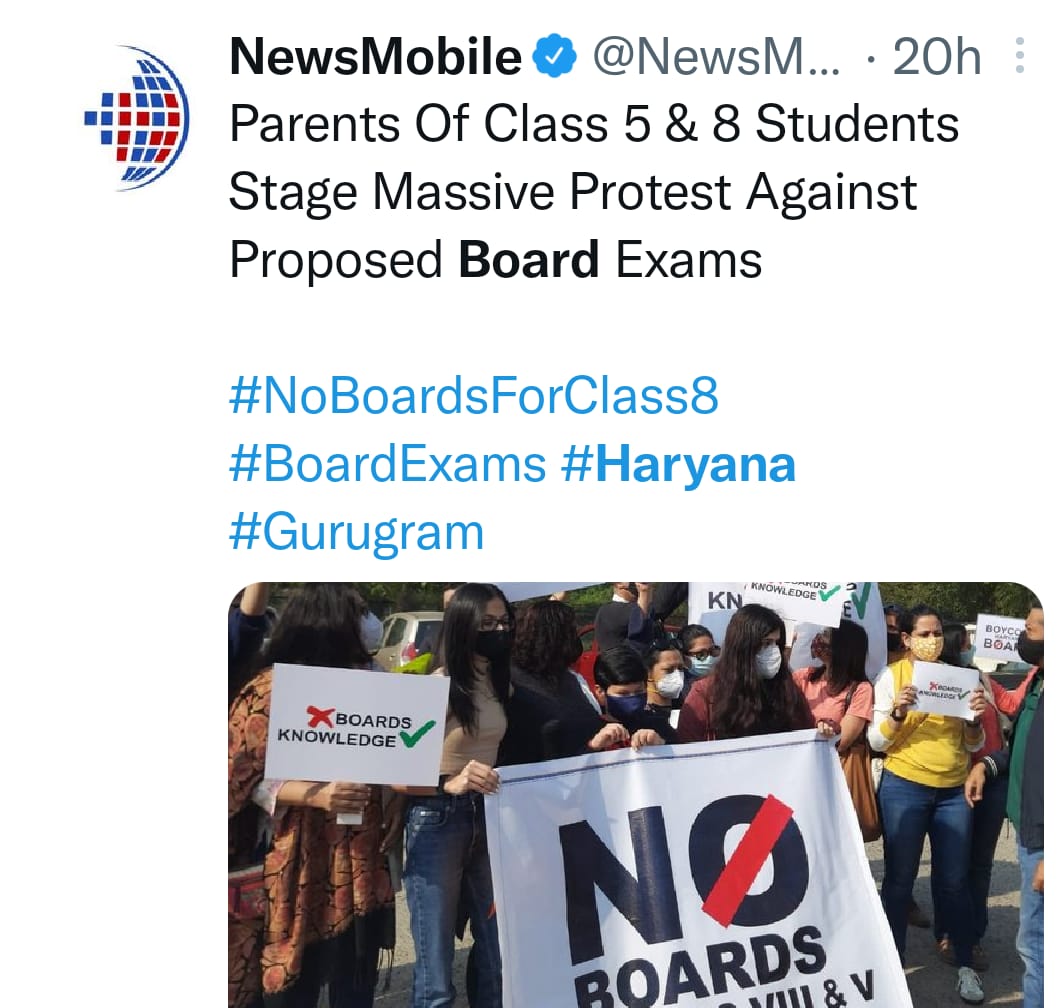 ‘No Boards’ Is Must, As BSEH Decision Is Regressive: Parents

As soon as the students and their parents became aware of the situation, they held talks with school authorities to solve the issue. But the result was unsatisfactory as schools are under pressure to follow the BSEH guidelines. As per reports, even many schools were not consulted about the development.

The parents and students are worried as the syllabus for the upcoming boards are different from the school. This will add an enormous amount of pressure on kids studies pattern. Not only this, due to the pandemic, students are not finding it easy to learn and perform with the change in the mode of education. Now, suddenly introducing new board exams with a new syllabus is a nerve-wracking situation for both parents and students. Already children are going through so many emotional and behavioural pattern issues due to discontinuous patterns of study and learning. 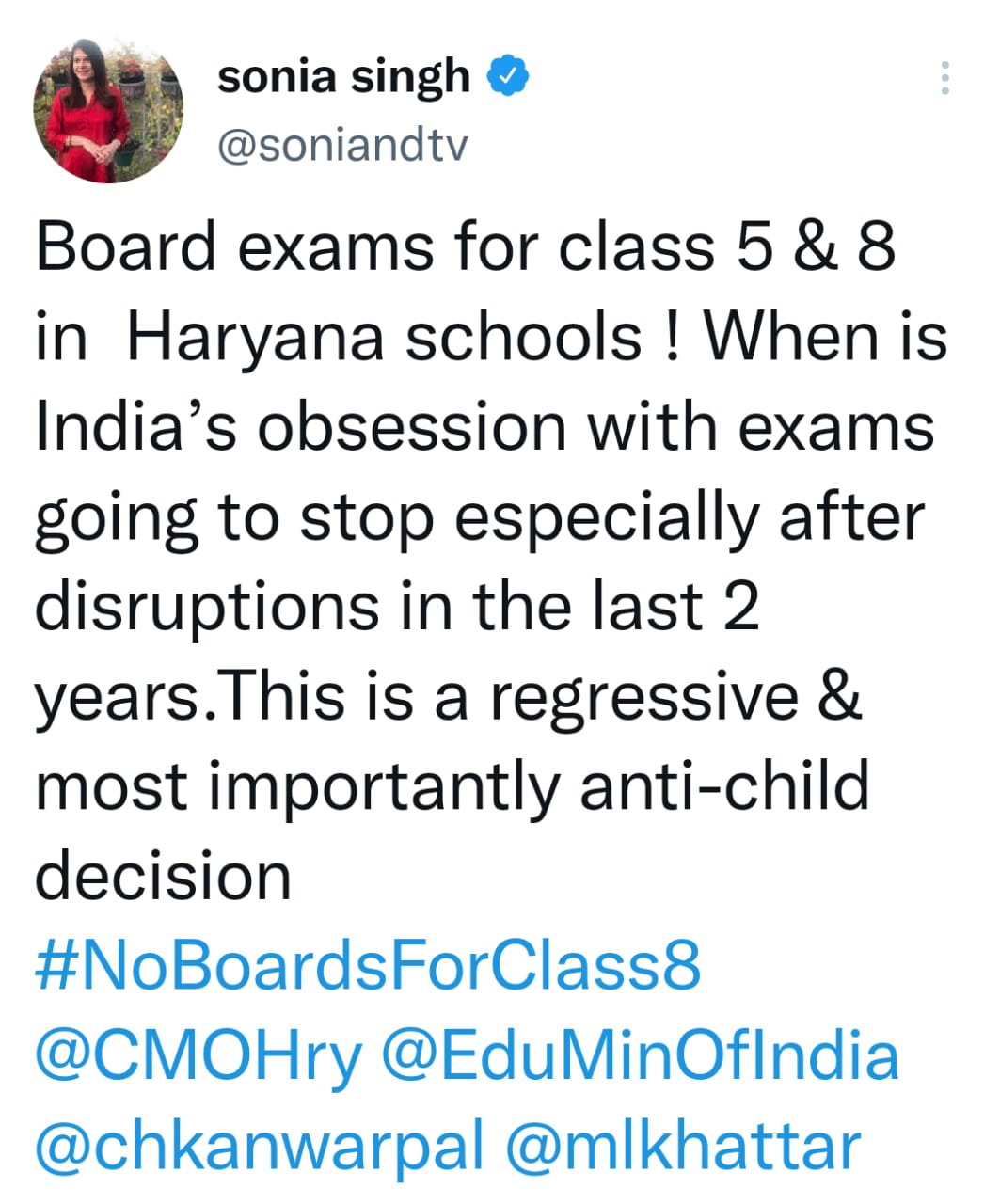 Whereas parents and students want that the education board should be bothered about the knowledge and overall development of children rather than thinking of introducing exams at such an age. School authorities are a bit baffled by the sudden introduction of a new syllabus and parameters introduced by the BSEH. Despite repeated requests by the parents there seems to be no bending down by the government at the present time.

Finally, parents and students started the protest so that it comes under the notice of education authorities. As both feel that education needs to be more practical and knowledge-based rather than focusing on marks. The BSEH has also mentioned that if a student fails in class 8 board exams. Then he/she will not be eligible for studying 9th class. On 9th Feb 2022, the school association filed a petition in the Punjab and Haryana high court against the new amendment by the Haryana government.

As of now, the matter is in court yet the Haryana school education board has asked all schools to register themselves for the board exams this year. The CBSE and CISCE boards have already shown the red flag regarding the decision. The next hearing is slated for 4th April 2022. Parents have also started an online petition against the decision. Almost 14,000 parents have signed in opposing the introduction of board exams for classes 5 and 8 by Haryana.

At this point where education needs to be in touch with reality and practical life. Such sudden impending decisions by the state education board are a representation of a lack of direction and development in education policies. When in “Mann Ki Baat” PM Modi address the students to focus on the power of knowledge and creativity. Such exams are just a mere reflection of the reality of the ground. As the board will be the one who will decide the capability on the basis of grades and marks a student. We all need to focus on education as means of upliftment of society through knowledge rather than using it as a scale to measure success.