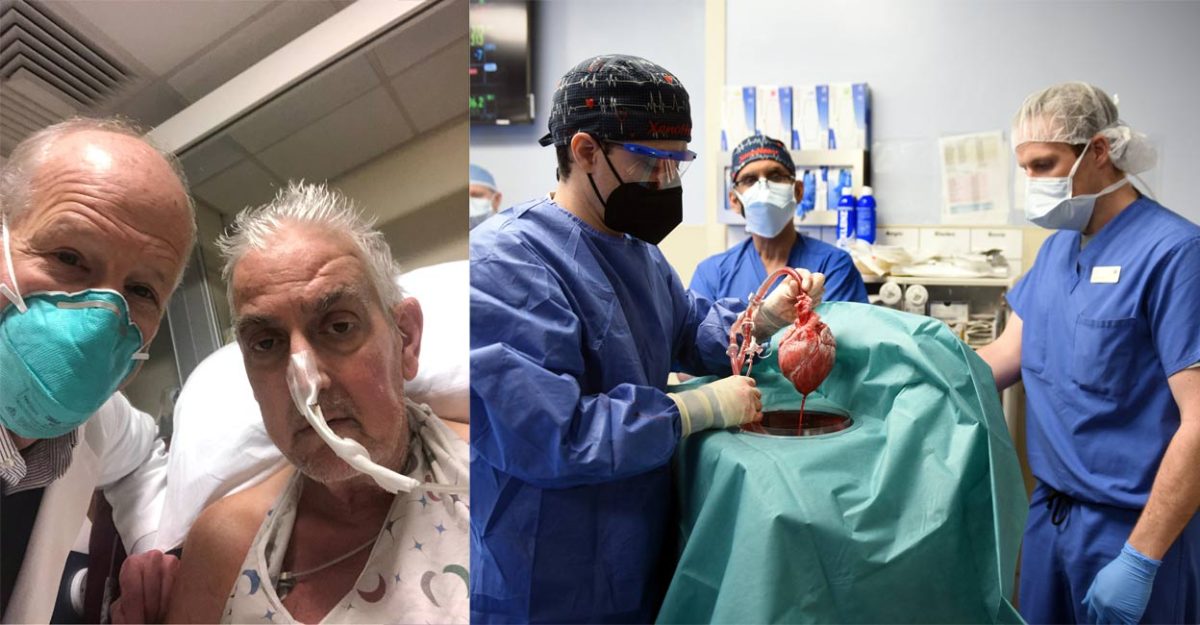 This handout photo released by the University of Maryland School of Medicine on January 10, 2022 shows surgeon Dr Bartley Griffith (L) with patient David Bennett, Sr., who received a heart implant from a genetically modified pig, in Baltimore, Maryland, in January 2022. (R) Surgeons performing the transplant in Baltimore, Maryland, on January 7, 2022. Photo: UNIVERSITY OF MARYLAND SCHOOL OF MEDICINE/AFP

Medical Marvel in Xenotransplantation has been achieved by the surgeons of the US in Baltimore. The team of US surgeons has successfully transplanted a PIG’s heart into a human body. A human being who received this heart is David Bennett. David is a 57-year-old man who is ineligible to receive a human heart transplant. He is a terminal heart failure sufferer. He has undergone the surgery at the University of Maryland Medical Center. David is still under the observation of the doctors at the moment. According to doctors, he is doing well as of now.

WHY A MEDICAL MARVEL?

Well over the years it is clear that the number of organ donors is always less as compared to the demand. Such shortage has always led to such experiments. Where scientists have tried to transplant the heart of another animal into a human being. This method in medical science is known as Xenotransplantation. Nearly, 120,000 Americans need organ transplants. As a result of the shortage of Organ donation, 20 people die in the US alone on daily basis. The issue is that serious. So, this step can surely help in saving many lives if becomes successful in the long term. Though doctors have said that it’s too early to predict the success of the surgery.

The man who receives this genetically modified Pig’s heart is a 57-year-old laborer named David Bennett. He says ” I want to live . I know it’s a shot in the dark, but it’s my last choice”. David has spent the last few months in bed on a heart-lung bypass machine. The surgery was performed by Dr. Bartley Griffith, director of the cardiac transplant program at the University of Maryland Medical Center. The surgery took nine hours to complete.

A pig’s heart is a better option as compared to other animals as pigs can achieve adult human size hearts in six months. But it needed some genetic modifications before carrying out the procedure. For example, four genes were inactivated including the sugar gene, growth gene. Not only this six human genes were also inserted in the donor pig. The main aim of these modifications is to make the animal organ acceptable to the human body’s immune system. But it’s too early to call it a success because earlier the patient with Xenotransplantation has not survived for long. For example, in 1984 Baby Fae lived for 21 days with a balloon heart.

If this surgery becomes successful then it can open doors for new experiments. This can help solve the issue of organ shortage in a more calculative manner. Earlier also we have achieved the impossible in the field of surgery and medical science and this will be a golden feather for mankind.