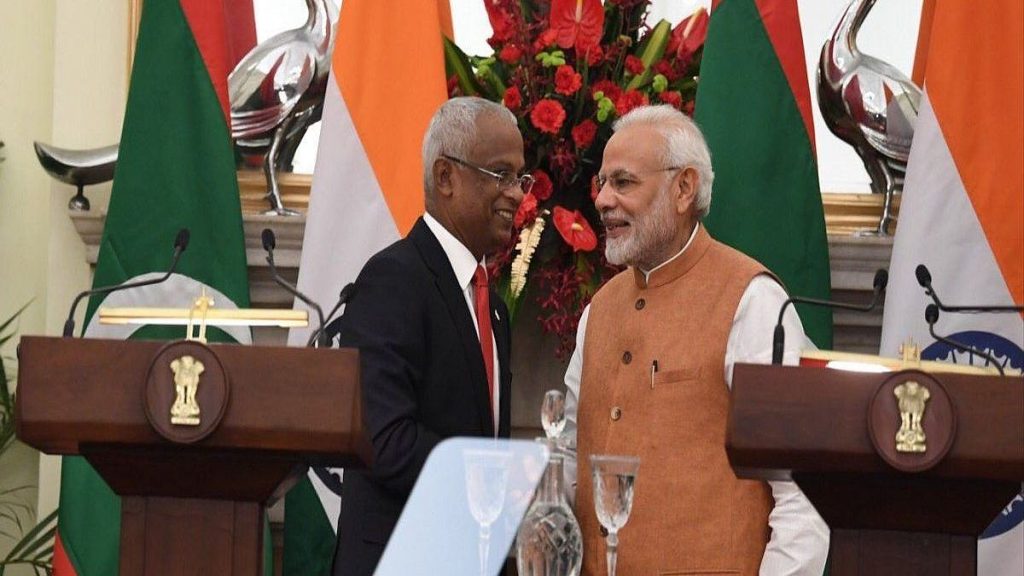 President of Maldives with PM Modi

Indo-Maldives relationship changed with the leadership. India helped Maldives on maintaining security. India was one of the first nations to recognize Maldives‘ independence. Indian Army’s ‘Operation Cactus’ helped subdue a coup in Maldives by a pro-Eelam group in 1988. India has a naval fleet stationed in Maldives since 2009 at the latter’s request.
Regular Indo-Maldives joint military exercises are held to enhance the inter-operability and counter-terrorism. India has lent economic aid and participated in bilateral programmes for the development of infrastructure, health, civil aviation, telecommunications and labour . India built the Indira Gandhi Memorial Hospital in Malé, and supplied relief after the tsunami of 2004. In return, Maldives supported India as a permanent member of an expanded UN Security Council. 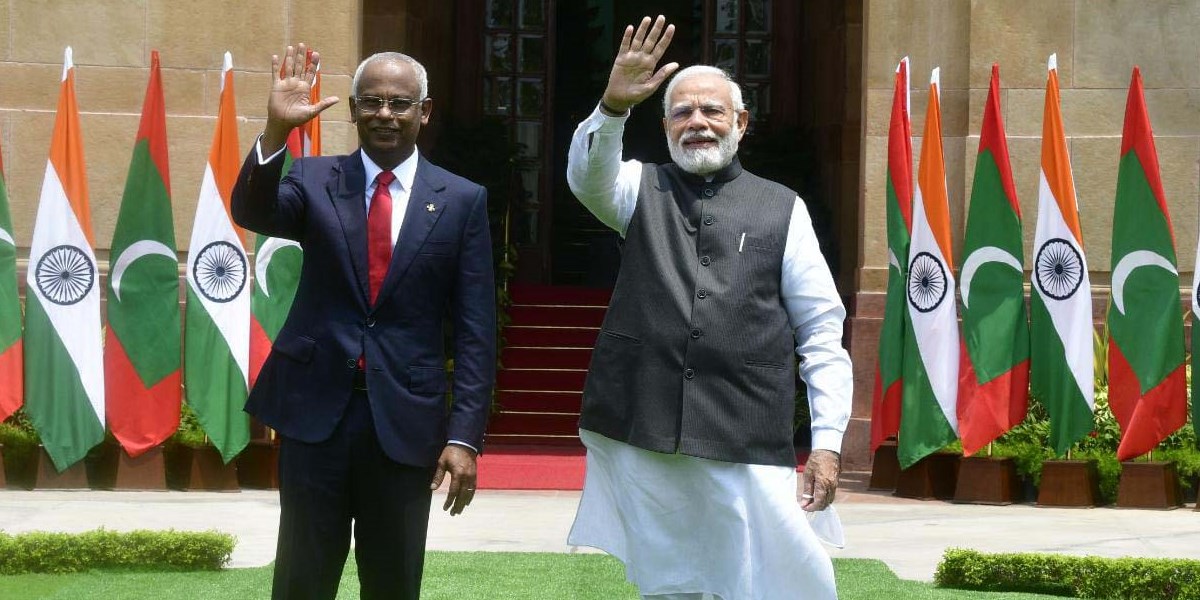 Solih arrived on Monday for a four day diplomatic visit to New Delhi. He scheduled to meet the newly elected President Droupadi Murmu. He vowed to follow an ‘India First’ policy. He is determined to shape the Indo-Maldives in a stronger way giving India the highest priority. There has been total of six bilateral pacts signed by the heads of the two countries.

Modi has emphasized on transnational crime, terrorism, and drug trafficking in the Indian Ocean. He stressed that it is critical to address these issues through a close contact and coordination between India and the Maldives. India agreed on aid in capacity building and training support for Maldivian security officials. India has announced to provide a second Landing Assault Craft and a replacement ship for the CGS Huravee, an indigenously built Trinkat-class patrol vessel and 24 utility vehicles.

India and the Maldives announced the Greater Malé Connectivity Project (GMCP) on Tuesday. Along with that the construction of 4,000 social housing units, $119 million buyer’s credit funding from the Exim Bank for the construction of another 2,000 social housing units in the Greater Malé region. The GMCP is the largest infrastructure project ever undertaken by India. There was also duty-free importation of tuna from the Maldives under the SAFTA framework. 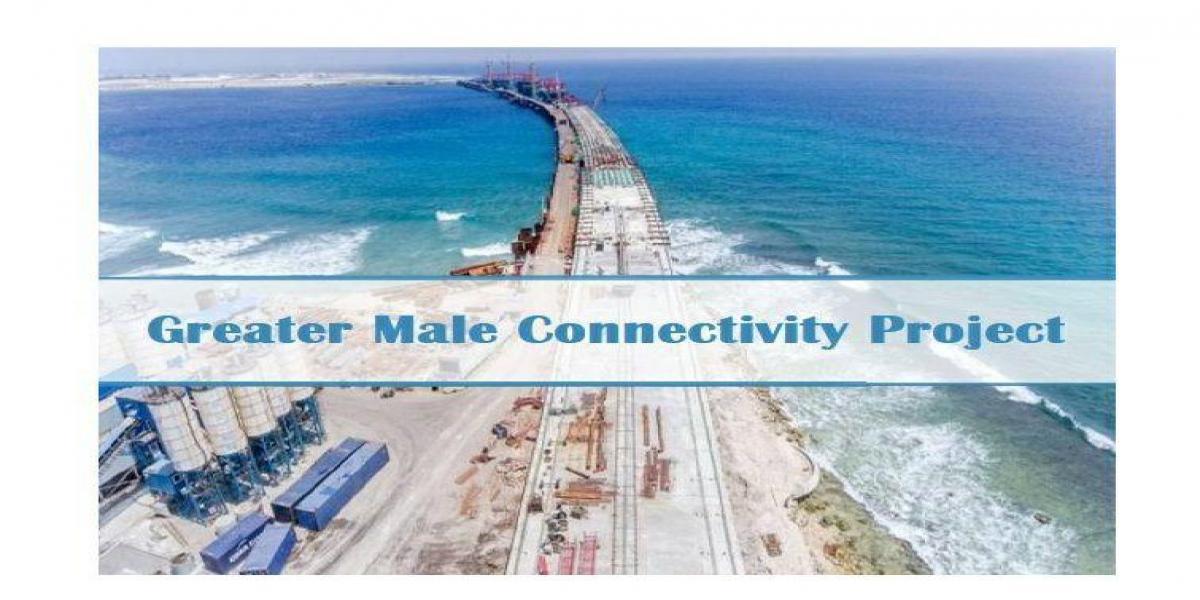 Maldives had taken a pro-China policy under ex-president Abdulla Yameen. He endorsed the BRI and other Chinese investments on infrastructures, free trade agreement, investments in tourism and agriculture etc. These have incurred a debt of about $3.1 billion which gives Beijing economic and political supremacy over the Maldives. He also led Chinese navy to conduct ‘friendly exercise’ in its waters. 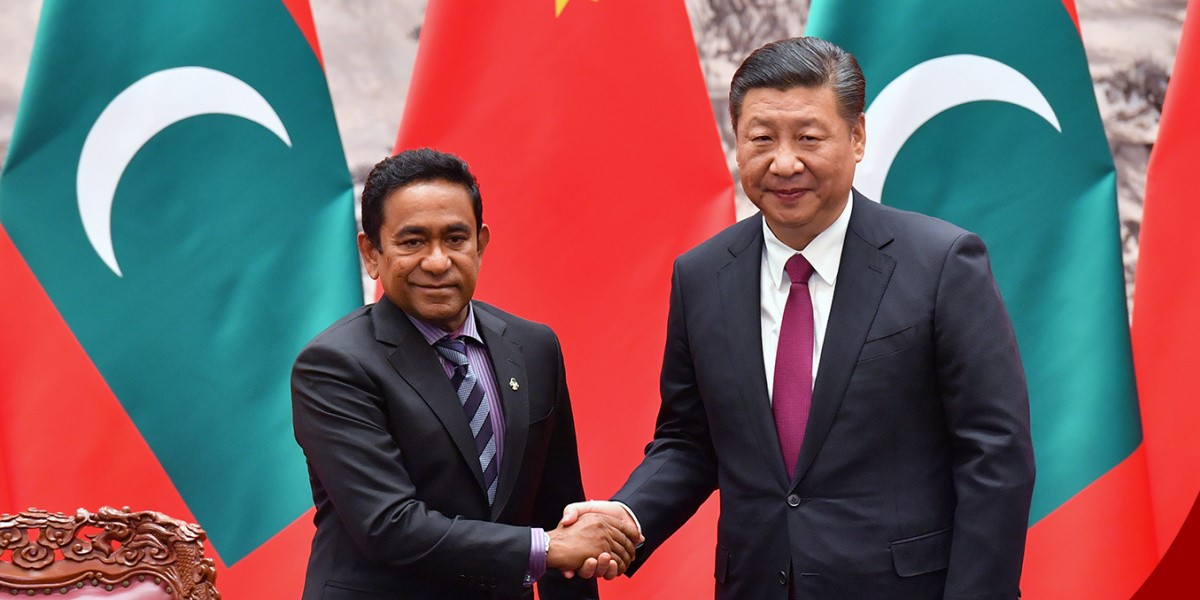 Yameen, now accuses the present government for allowing Indian military in the island nation. Yameen has taken an ‘India out’ campaign for the upcoming elections in Maldives. The presence of China in this equation makes the relationship quite complicated.  Beijing’s proximity with Maldives under President Yameen strained relations with India. China gradually landed with its geo-economic power on Maldives. India was made to withdraw projects which were a part of security assistance and also denied visa for Indians. All these non-transparent loans from China rendered Maldives debt-laden challenging its democratic institutions.

After Solih’s win Maldives shifted its India policy to a positive side. The presidential visit further strengthened the relationship. He rejects his predecessor, calling India the “closest friend”. India have promised full assistance to Maldives. With this gesture India can balance out China’s growing clout in the Indian Ocean. China found the Indian Ocean geopolitically ‘comfortable’ with the growing importance of Indo-Pacific and stiff resistance in the wider Pacific area. Also, Maldives lies on key maritime trading lanes of the Indian Ocean. Thus India must be on its guard to engage actors like the Maldives to safeguard its regional status.