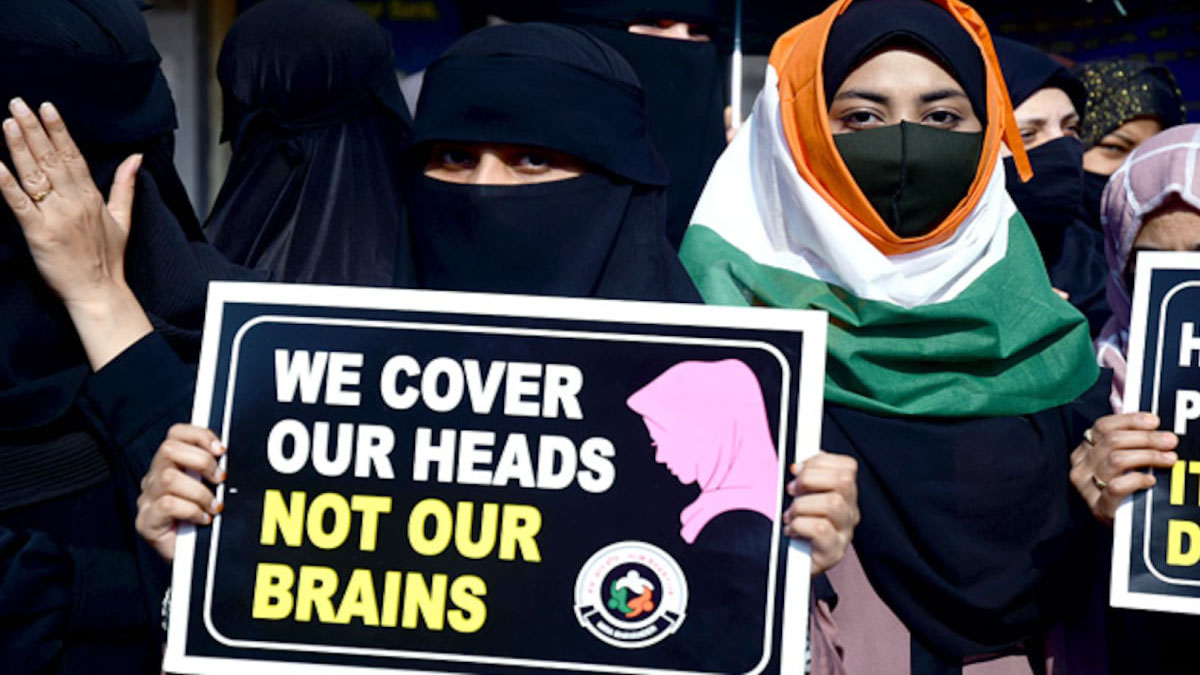 The hijab row began on new year’s day 2022 in Karnataka. But within a little more than a month, it has turned into a full-blown controversy drawing the attention of the entire nation. The hijab is a headscarf worn by Muslim girls.

The problem started when some Muslim girl students in Udupi Women’s Pre-University College came to their classes wearing hijabs and were barred to enter. What stoked the fire was when the Hindu students attended the classes wearing saffron shawls purely as a mark of protest.

However, in order to ensure uniformity in the classroom, principal Rudra Gowda did not allow the girls to wear hijab. The girl students protested and soon the incident spread to other places such as Bapagadi village and Mangalore colleges.

In order to find a solution, the college authorities called a meeting of the students and the parents, but it remained inconclusive. Subsequently, the Muslim students began protesting outside the college. A  Muslim girl student took the matter to the court and filed a writ petition.

The row spilt over to Bhadravati where the students of the local college opposed the wearing of hijab by the Muslim girls of the college in their classes. It was also reported that Hindu groups were involved in forcing the students to wear saffron shawls in protest, this happened even when the girls attended the class without wearing hijab.

To defuse the situation, Karnataka chief minister Basavaraj Bommai held a meeting with the state’s education minister and other government officials. The educational institutions were instructed to follow the existing uniform related rules and wait till the High Court issued an order in this respect.

Possibility Of A Dirty Turn

The incident may take a violent turn as police arrested two persons for carrying knives in Kundapur town. In a college in Koteshwara town when the principal disallowed three Muslim students from entering the college who came wearing hijab, the girls, in protest, walked out of the college.

What is worrisome is that there are indications of the row taking a dirty turn. In the Mandya district, a large number of students came to college wearing saffron shawls and started chanting ” Jai Shri Ram”.

The incident may also be given a political colour worsening the situation further. After remaining quiet for some time, Congress leader Rahul Gandhi commented, “By letting student’s hijab come in the way of their education, we are robbing the future of the daughter of India”. However, one  BJP leader opposed the Muslim girl’s demand to wear a hijab.

Political Parties should stay away from the controversy. It is the responsibility of the Principal of the college to handle the situation fairly and impartially and see that the students attend the classes and maintain the uniformity of it. There should be total uniformity in the educational institutions, it is wrong to turn them into religious places. The case is now in the court, let the students and parents wait till it gives its verdict.