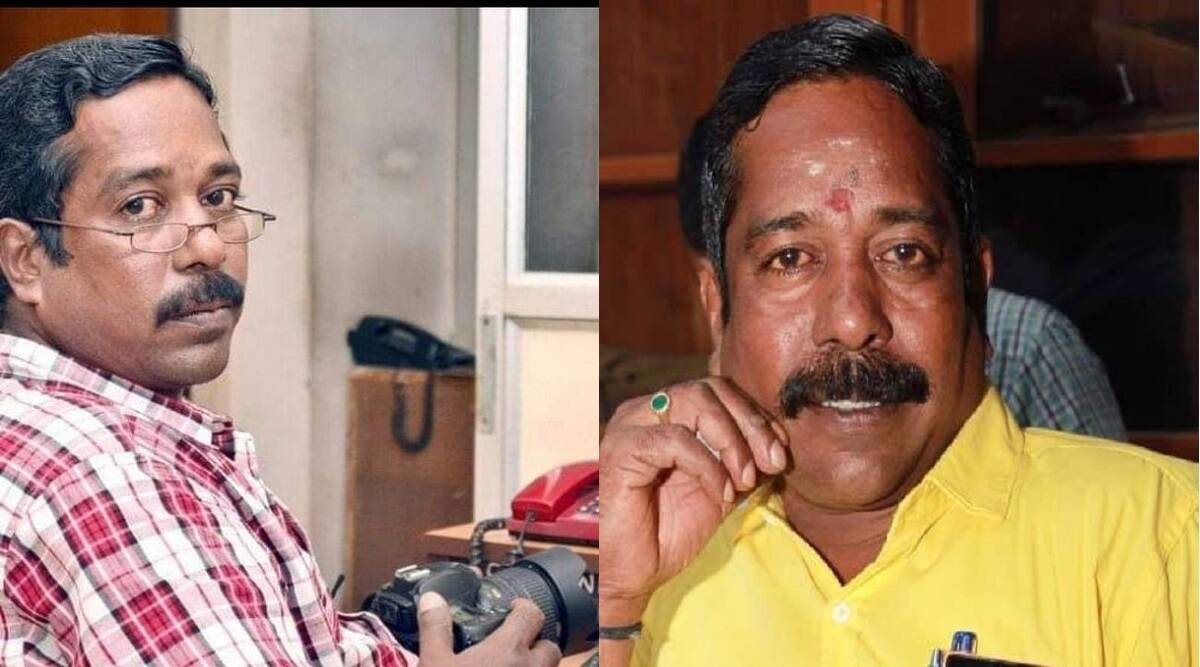 T Kumar, a Chennai-based photo-journalist and bureau chief of the United News of India (UNI), committed suicide in the office premises   on the evening of Sunday, the February 13, as the agency had not paid his salary for a long time. This problem confronts a large number of staffers of the agency who regret their senior journalist, Vishwaa Viswanaath. The insiders in the organisation, who preferred to speak on a condition of anonymity, said that the 56-year-old journalist had taken the extreme step after the employees were not paid properly for 60 months in their Chennai office that was entrusted with the responsibility to Mann the Southern Zone as a connectivity centre to organise articles and features from Andhra Pradesh, Telangana, Kerala, Karnataka and Puducherry, apart from news items emanating from Chennai to facilitate the process for their subscribers. 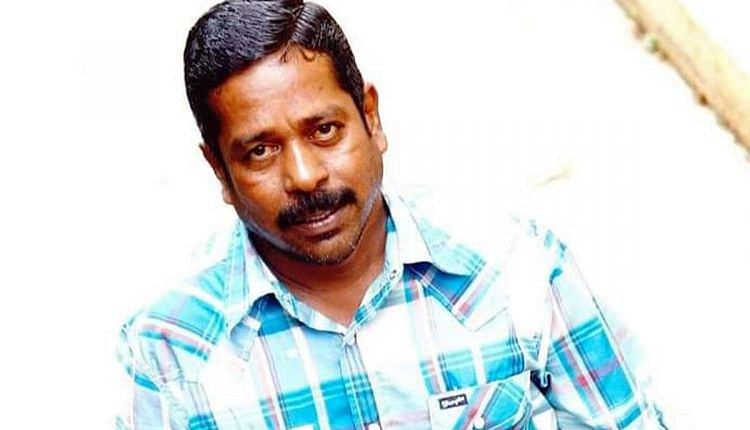 Mr Viswanaath, lamented that a large number of employees of the UNI have been drawing only a meagre amount and, that too, in instalments every month. The Journalist also asserts that the agency is getting approximately Rs six lakh rupees as revenue from Tamil Nadu Bureau, as it is one of the best paid states for the service rendered to them. A few former employees of the agency averred that many staffers were paid only on every alternate month, and at the most they would get seven salaries in each year. “Arrears running upto 42 to 44 months had amassed when I was working there”, says an ex-employee, who preferred to remain anonymous, before adding that the service of many permanent employees were terminated without clearing their pending dues when Ajay Kaul took over as editor-in-chief.

Adding fuel to the fire, Provident Fund dues of several employees was also not cleared by the agency. Left with no other alternative, a section of the employees had filed their petitions in the labour courts for redressal of their ventilated grievances. It is reliably learnt that the deceased scribe Kumar had arranged for his daughter’s betrothal this month and was hard-pressed for funds. A recent statement released by the UNI All-India Employees Federation said that Mr Kumar’s wife had met with an accident a few months ago and he had applied for an amount of at least Rs one lakh against his pending dues for her medical treatment. However, he was sent a paltry sum of Rs 25,000 only. Also, Mr Kumar’s daughter engagement was scheduled to be solemnised next week and it is learnt that he had applied for Rs five lakhs for the same, but the management was yet to respond.

The Union Federation also noted that there is a backlog of five years of salaries, yet the management has indulged in a callous attitude towards the dire-distress of the employees, which is grossly unfair. Adding salt to the wound, the management has taken a decision to stop payment of Rs 10,000 against the pending statutory gratuity, apart from salaries and other legal dues payable to former employees. The Employees Forum of the UNI has also condemned the nefarious designs of the management and has demanded an inquiry into the events leading to Kumar’s death and a stringent legal action against those found responsible for abetting the suicide. Their contention was that it is the bullies who are to be booked within no time by the law-enforcement agencies.

The Employees Front also alleges that only a fraction of the amount, i.e. Rs 15,000 of the monthly salaries as being released by the UNI head office in New Delhi, of late. The Federation reveals that the main control of UNI is with Manipal Media and all three Board of Directors are part of the Manipal group. The Chairman is Shri Sagar Mukhopadhyay of Manipal group, one of the UNI shareholders. The other two directors are Shri Binod Mandal (Also, Head Legal and Group Company Secretary Manipal Group) and Shri Pawan Kumar Sharma.

The shareholders include Jagran Prakashan Ltd, Kasturi & Sons Ltd, Express Publication (Madurai), HT Media Ltd, Statesman Ltd., and Nava Bharat Press (Bhopal) Ltd, ABP PVt Ltd., and Times of India, among others, says the federation, before adding that Mukhopadhyay was given the chairmanship with a promise to revive UNI last year. Mr Mandal and Mr Sharma are also directly or indirectly connected to Manipal Group. It is also being alleged that the group, which has not brought any fresh investments, is controlling day-to-day affairs of the agency. On the contrary they have burdened the agency with approximately Rs 20 lakh monthly expenditure by appointing more than 30 contractual employees on key positions with attractive remuneration. Thus, in a way, they are in a way responsible for the plight of employees, charges the Federation. 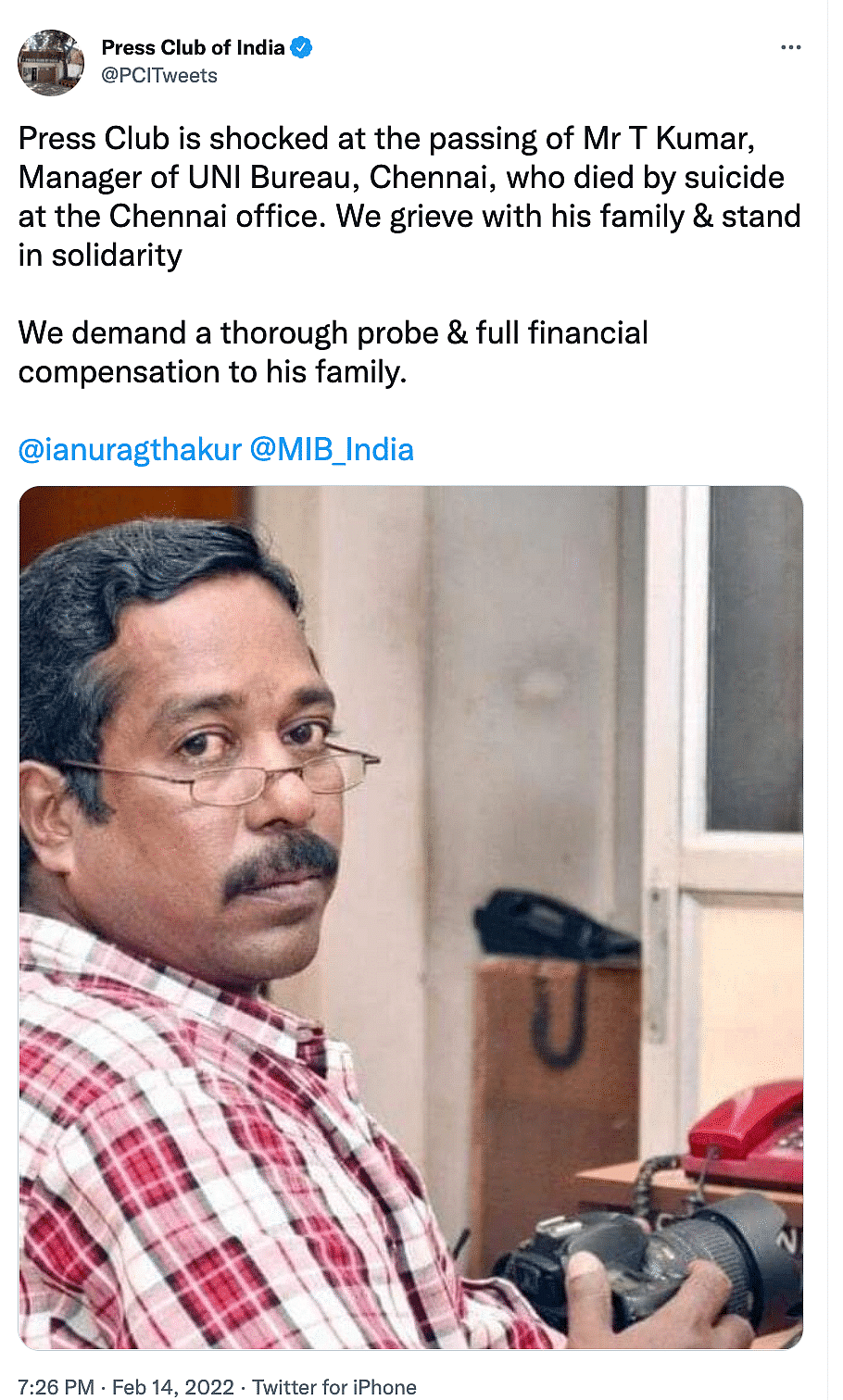 Tamil Nadu Chief Minister MK Stalin released a statement on the issue in which he ruled, “I am deeply saddened to hear that a senior photojournalist and Chennai Bureau chief of UNI has taken his own life. I extend my condolences to his family and the journalist community.” He is reported to have sanctioned Rs three lakhs to the bereaved family, although the former chief minister, Edapaddi Palanisami has suggested him to pay the family Rs 25 lakh as solatium from the journalists’ welfare fund. Mr Kaul also shared his view and commented with dejection, “It’s extremely painful and tragic that we lost a colleague in such a manner. We all are in a state of shock. There’s no denying that UNI has been going through financial distress and we are making earnest efforts to address the situation.” However, it is customary on the part of the earlier editors to indulge in crocodile tears with, “Aap Ko Do roti nahi milega toh hum bhi nahin khayenge” (If you do not get two pieces of roti, I will also not eat) to the grief-stricken employees, similar to the manner in which, the former Prime Minister V.P. Singh used to narrate to the people in his public speeches.

It may be recalled that the UNI was launched by India’s first Prime Minister, Pandit Jawaharlal Nehru in 1961, as he felt that the need of another wire service, apart from the Press Trust of India, would make a world of difference to the readers in India. There is no iota of doubt that the agency did a commendable service for about five decades, before the financial problem started crippling it. However, grapevines in the media circle inform that it was a man-made creation and the top management in New Delhi, with its style of functioning has encouraged mis-management, which forced a large number of staffers to quit out of frustration.

The agency, at one time, was even rated better than its contemporary and rival PTI with its style-book, but it paled into insignificance when many subscribers had dropped out due to its dismal performance. Interestingly, no English and Tamil leading dailies, except perhaps the Thina(Daily) Thanti group is subscribing to the agency, on a sympathetic ground from Tamil Nadu. The UNI that attained its pinnacle in the yesteryear had the mortification of their trade union leader being locked inside their office premises in Mumbai for hours together by the management, before being released by the CPI(M) Politburo Member, Prakash Karath in the past.

Will the agency recover from its trauma? It remains to be seen, as other agencies like the ANI have replaced it in the past. It has lost its old charm, but their former staffers would admit that the agency in its prime time had created a family atmosphere. Any fourth estate employee in New Delhi would not miss the fabulous UNI canteen in Delhi, whether they accept the agency’s credentials or not.  The pity is that the UNI staffers started relying on the news from television channels and newspapers rather than dishing out inputs to the subscribers by catching the deadline. Naturally, many dailies had an impression that it is they who are serving the agency and not the other way round.

The agency’s skeleton staff strength has also not improved their prospects, as they have the daunting task of competing with their bete noire, PTI at regular intervals Will the saner counsel prevail on the UNI management now? It is never too late. Well, your guess is as good as mine!