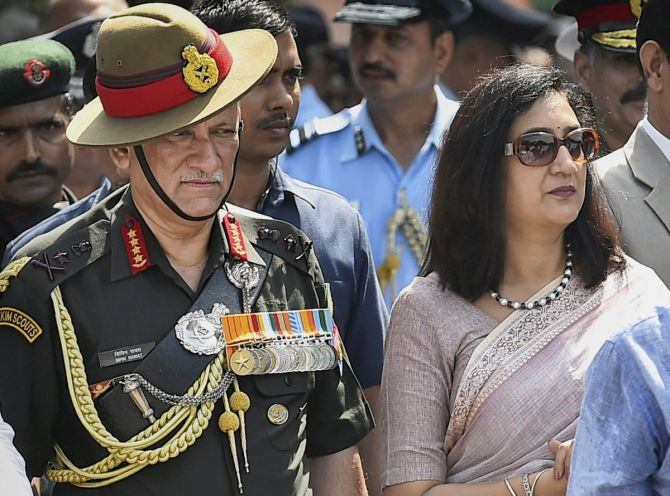 General Bipin Rawat, India’s first-ever Chief of Defence Staff, has died in a helicopter crash in Coonoor, Tamil Nadu. He was travelling with his wife and 11 others to Wellington, Tamil Nadu. The Russian-made military chopper, Mi-17V5, was heading for Wellington. The IAF said, “Gen Bipin Rawat, Chief of Defence Staff (CDS) was on a visit to Defence Services Staff College, Wellington (Nilgiri Hills) to address the faculty and student officers of the Staff Course today,”. The last rites of Gen Rawat are to be held in New Delhi.

Gen Rawat was appointed as the Chief of Defence Staff in January 2019. This was the first time the post of CDS was being introduced. It was done to bring together the three defence forces of the nation, the Army, the Navy, and the Air Force. Since then, Gen Rawat has been in-charge of various operations.

Along with Gen Rawat and his wife, seven other military passengers and five crew members were on board on the chopper. The Indian Air Force has ordered a court of inquiry for the accident. An emergency session is also being held by the cabinet security committee, headed by Prime Minister Narendra Modi.

The only survivor of the crash is Group Captain, Varun Singh. He is directing staff at DSCC. Currently, undergoing treatment at Military Hospital in Wellington, he has been injured badly.

As reported by local media, one eyewitness said about “terrible loud sounds” before the chopper fell to the ground. “I saw the helicopter coming down… it hit one tree and was on fire,”, Krishnamurthy, a local resident told the media house ‘The News Minute’. “There were plumes of smoke when I ran over. In minutes, the fire was higher than my house.”

The whole nation has gone into a state of shock for the untimely and tragic demise of Gen Rawat, his wife and others lost in the crash.

In a tweet, PM Modi has expressed his condolences: “A true patriot, he greatly contributed to modernising our armed forces and security apparatus. His insights and perspectives on strategic matters were exceptions. His passing away has saddened me deeply.”

Defence Minister Rajnath Singh said his untimely demise is an irreparable loss to the armed forces and the country.