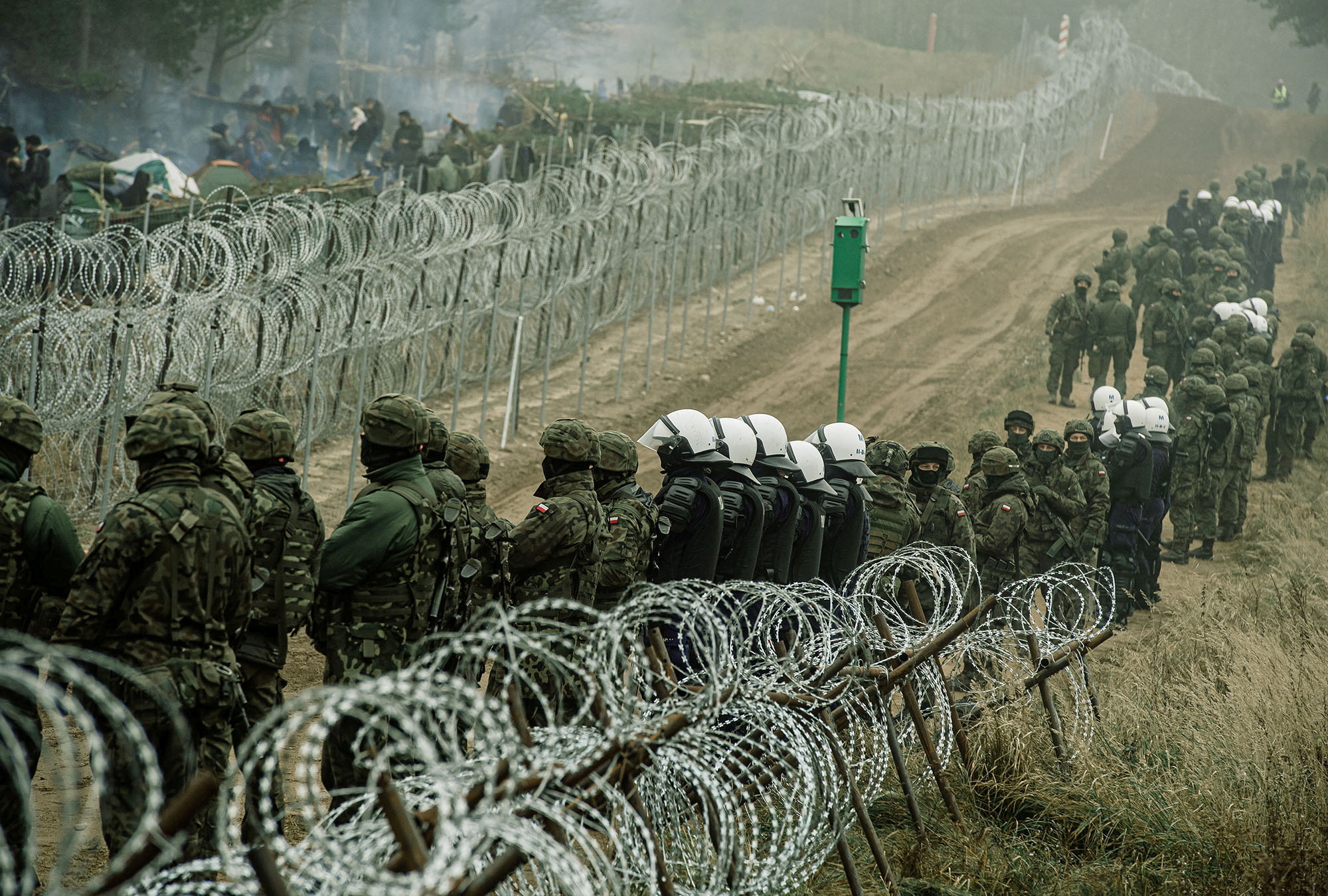 FILE PHOTO: Polish soldiers and police watch migrants at the Poland/Belarus border near Kuznica, Poland, in this photograph released by the Territorial Defence Forces, November 12, 2021. Irek Dorozanski/DWOT/Handout via REUTERS

A life threatening crisis is happening on the border between Poland and Belarus. Here, the European country Belarus is using thousands of vulnerable refugees as weapons against Poland. Autocratic ruler of Belarus, Alexander Lukashenko has invited thousands of refugees from Afghanistan, Syria, and Iraq and dumped them in the forest near Poland’s border. They have been told that if they need to survive, they would have to cut the razor wires of the border and enter into Poland. Or else they’ll freeze into death in the chilled forest. Images of migrants  who travelled to Kuznica-Bruzhi border crossing via Belarus, trying to force their way Into Poland and being deterred have occupied attention all over the world.

Once, Belarus was a part of Soviet Union. It got independence in 1991 and came to be known as Republics of Belarus. It is a landlocked country with Poland on its west, Lithuania and Latvia in the North, Ukraine in the south and Russia in the East. It is important to note that Poland, Latvia and Lithuania are in the European Union and the other European Union countries, like Germany, France and all the western European countries, Belarus doesn’t share any border with them. But Russia, Ukraine, and Belarus are not parts of the European Union.

Months ago, thousands of refugee groups were getting out of war-torn countries like Afghanistan, Syria and Iraq. All of them started coming into Minsk, the capital of Belarus. Allegedly, They were then transported to the borders of the European Union such as Poland, Lithuania and Latvia illegally. Followed by this, some online advertisements on social media were spread which claimed that the route of Belarus had opened up and the refugees could come to European Union through this route. Countries like Poland, by hearing this news strengthened the security of their border. From these incidents, it is evident that the Belarusian government was actively encouraging these refugees to flee into the European Union. The Belarusian government dumped them into the forest and gave them wire cutters to cut the barbed wires and cross the border.

Now let’s seek the answer to the question why Belarus did so?

Since 1994,  Belarus is ruled by the same president, Alexander Lukashenko. In 2020 presidential elections were held in Belarus. Lukashenko won the election. But this election, and every election since 1994, were all deemed to be unfair. It shows that the current president of Belarus is a dictator. And since all other countries surrounding Belarus are democracies,  the citizens of Belarus are agitated and they wanted to bring down the dictator. Recently, there were protests by thousands of people. But police arrested thousands including the leaders of opposition parties.

In response, the European Union and the USA, declared economic sanctions against the Lukashenko government. These sanctions weren’t very significant until May 2021 when a  shocking incident took place.

There was a refugee crisis in 2015 when refugees gathered in Europe in large numbers where the European Union considered it a herculean task to deal with it. Belarus latched on to this weak point. This is why Belarus openly encouraged refugees to come to their country and then dumped them at the border. Lot of people have lost their lives due frigidity and starvation.

While others, in a hurry to survive, started fighting with the polish border guards with the troops firing water cannons and tear gas at the refugees.

Lukashenko denies all the allegations against him and he also added that the government cannot help unless the EU’s sanctions are lifted.

Belarus dictator hasn’t intended to stop here. He has issued the next threat that they would switch off the gas pipelines. Actually, a large portion of gas being used in Europe, comes from Russia which is transferred through pipelines. And these pipelines go through Belarus which they have claimed to break them off. This will impact the economy of Europe on a larger basis.

Now what will Europe do in such a situation?

Initially, Europe may withdraw its economic sanctions. So that Belarus may stop responding like this. But doing so would mean indirectly supporting dictatorship. There is also another option left, which is to strengthen the economic sanctions imposed by Europe including blacklisting of certain airlines that are transporting migrants to Belarus to be later pushed on to the border with Poland. Observers also claim that Lukashenko may try to elevate the crisis to pressure EU to ease sanctions.