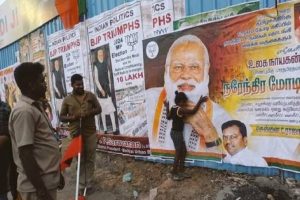 Its been almost a decade, to be precise ‘8 years and 9 months’, since Bhartiya Janta Party announced Narendra Modi as their Prime Ministerial candidate. It was from there the nation has been gripped in the magnificent wave of Modi’s aura and charisma. There is no doubt that it was this Modi wave only which resulted in the stupendous win in 2014 Lok Sabha elections. In 2019 general elections, when the various political pundits and experts were hinting towards a less satisfactory win for BJP and a massive downfall in BJP’s loksabha seat share, Modi proved them all wrong as the party won by even a bigger margin than the previous general election by breaking their own records, signifying that ‘Modi wave’ is not mere a high tide of the dawn but a staggering tornado in a violent thunderstorm which is showing no signs of settling down. 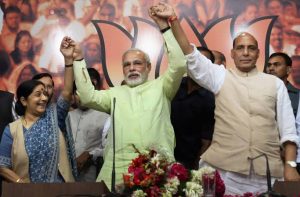 While BJP enjoys a massive support from public in hindi belt as well as other regions of country including that of the North-East, it still struggles to make a footprint in the southern peninsula. Out of the five states that constitute the southern part of the country, Karnataka is the only state where BJP is able to garner some public support. As of now, TamilNadu and Kerela doesn’t seems to be synchronizing with BJP’s ideology at all as even after putting so much of energy, capital and manpower they ended up winning just four seats in TamilNadu and zero seats in Kerela in the Legislative assembly elections held last year. BJP suffers same trauma in the states of Telangana and Andhra Pradesh as well where it have 3 seats and 0 seats respectively. As appears from the statistics, BJP knows there are higher chances of creating a room of their own in TamilNadu and Telangana as compare to Kerela and Andhra Pradesh, especially after their tremendous performance in Greater Hyderabad Municipal corporation elections winning 48 seats of total 150 seats and opening their account for the very first time in Greater Chennai Corporation elections.

On 26th may, Prime minister Narendra Modi visited two of the southern states, Telangana and TamilNadu, announcing a number of welfare schemes and inaugurating several projects of worth thousands of crores. In Chennai, Narendra Modi addressed a large number of people in the Jawaharlal Nehru Indoor Stadium and inaugurated various important projects including redevelopment of five railway stations in TamilNadu (the pictorial representation of which appears to be much promising), a multi modal logistic park in Chennai, a 4-lane Chennai – Bengaluru expressway and many more amounting for more than 31,000 crore rupees. While addressing, he also emphasized on how important and glorious their tamil language and culture is to India by highlighting centre’s role in establishing Central Institute of Classical Tamil. 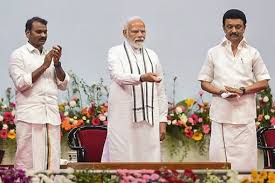 Prime Minister was also in Hyderabad the same day where he embraced the working of the Union Government and its support to the state while criticising the KCR government for governing the state inefficiently. He also attacked K. Chandrashekhar Rao personally for being a superstitious person, referring to recent changes he made in his residence for vaastu reasons. Modi’s visit to Telangana wasn’t a regular one and it would be not wrong to see it from political point of view as Telangana’s assembly elections are supposed to be held next year and BJP don’t want to left any stone unturned. But invading KCR’s territory will not be an easy task due to fundamental similarities between KCR and Modi which prevent Modi to stand out of the crowd. Rao also belong to a mediocre Indian family with a subtle background, enjoys a demigod stature and massive support in his state, has struggled his way to the top and have a side of him which supports and promotes ‘Hindutva’. 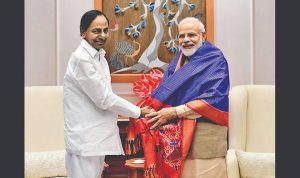 Along with KCR’s Telangana Rashtra Samiti, there is another regional party (technically not) which enjoys a decent support from other states also … its Asaduddin Owaisi’s “All India Majlis-E-Ittehadul Muslimeen (AIMIM). AIMIM have a strong and loyal base in Hyderabad as well as throughout the state of Telangana which makes it 2nd or sometimes 3rd number party in the state. AIMIM and TRS doesn’t lie on the exact same page but often comes together to prevent BJP from breaking into their castle. While BJP is eyeing towards south for gaining more support and states in upcoming elections, it would be myopic of us to say if they get successful in getting any looking at the current situation.