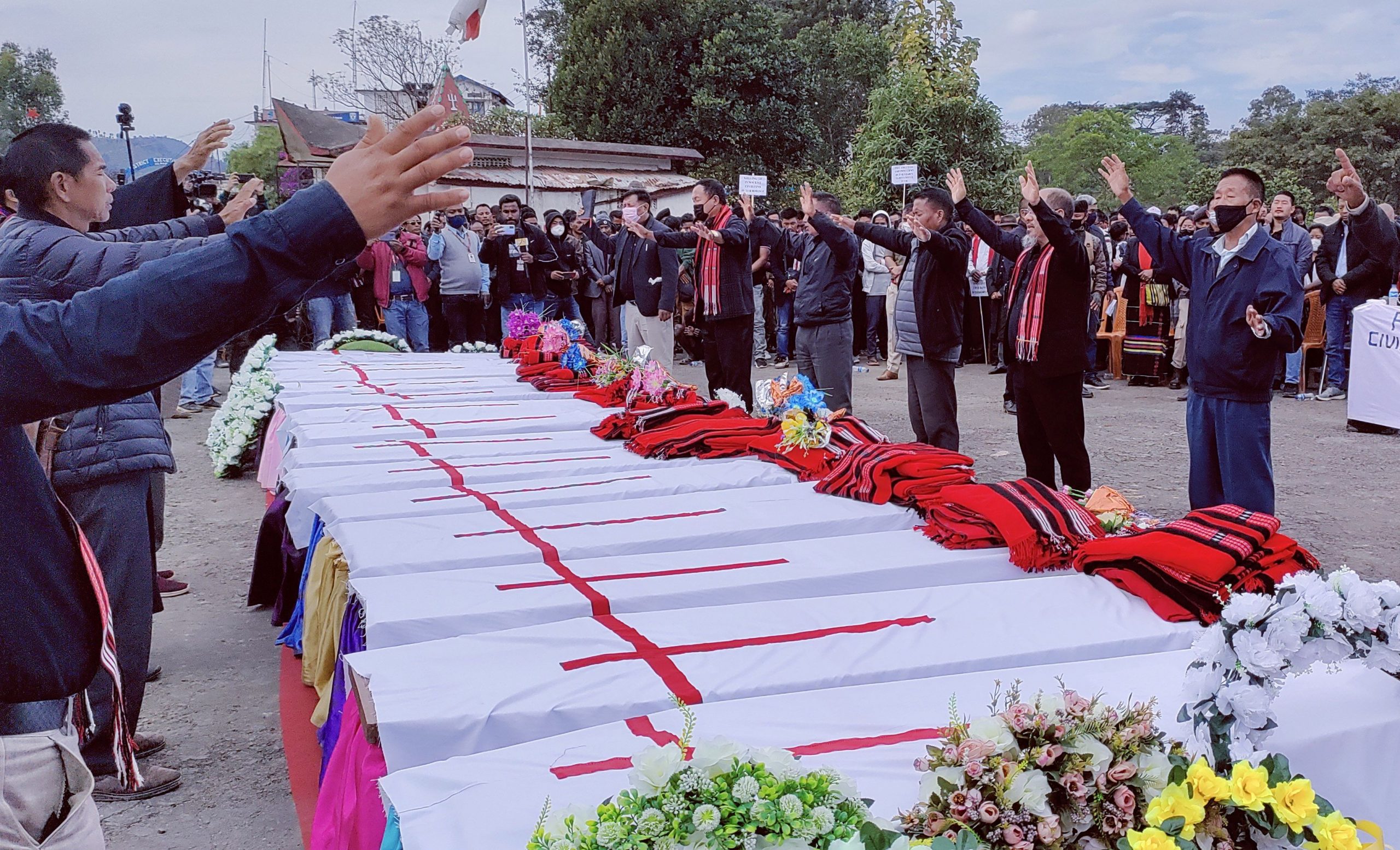 People attend a mass funeral of civilians who were mistakenly killed by security forces, in Mon district of the northeastern state of Nagaland, India, December 6, 2021. REUTERS/Stringer

The Para Special forces of Army open fired on a van carrying local coal miners, mistaken them as insurgents, in Mon district of Nagaland. The open fire resulted in killing of 6 civilians. The whole incident took place on Saturday, 4th December.

Angered by the happening, villagers attacked and started firing the soldier’s vehicle, killing 7 more civilians. One soldier is also reported to be dead in the firing. On Sunday, the anguish curtailed forward, wherein mob attacked the Assam Rifle camp. It resulted in killing of 1 more civilian.

Army has released a statement, saying: “Based on credible intelligence of likely movement of insurgents, a specific operation was planned to be conducted in the area of Tiru, Mon District, Nagaland. The incident and its aftermath are deeply regretted.”

The state police have alleged Army unit for the killing of civilians, in the FIR. It further allegedly states that the “intention” of security forces was to “murder and injure civilians”.

“It is to be noted that at the time of incident there was no police guide nor security forces did make requisition to police station to provide police guide for their operation. Hence it is obvious that the intention of security forces is to murder and injure civilians,” read a copy of the FIR by the state police.

Amit Shah stated in Lok Sabha and Rajya Sabha: “The Government of India sincerely regrets this unfortunate incident in Nagaland and expresses its deepest condolences to the families of those who have lost their lives.”

“Based on inputs received by the Indian Army about movement of the insurgents near Tiru village in Tizit area of Mon district, a team of 21 para-commandos of Indian Army laid an ambush in the evening of 04.12.2021. During the ambush, a vehicle approached the location and it was signaled to stop. However, the vehicle tried to flee, following which the vehicle, suspected of carrying insurgents, was fired upon resulting in killing of 6 out of 8 persons travelling in the vehicle. However, it turned out to be a case of mistaken identity. The two persons who sustained injuries were evacuated to the medical facilities by the Army personnel,” he said.

Further stating in the FIR, “At around 1530 hours, coal mine labourers of Oting village were returning to their native village Oting from Tiru in a vehicle Bolero pick up. On reaching at Longkhao between Upper Tiru and Oting village, security forces blankly opened fire at the vehicle without any provocation resulting to the killing of many Oting villagers and seriously injuring many others (sic).”

Following all this, section 144 of Criminal Procedure Code has been imposed in the Mon district, prohibiting public gathering of more than 5 people at a time.